Bruno Mars was honored to be asked to perform at the Super Bowl show, and he is getting ready for his performance in the freezing weather of New Jersey. 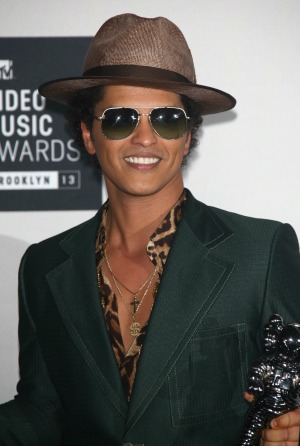 Bruno Mars has watched the Super Bowl halftime shows for years, but couldn’t believe it when he was asked to perform. The singer is getting ready for his performance on Sunday and says he has been freezing in New Jersey.

Look who Billboard crowned as 2013’s artist of the year >>

“The microphone turns into a Popsicle and all these things you don’t really think about going into it,” Mars told MTV.

Super Bowl planners took a big chance with this year’s game, planning the first cold-weather outdoor game in their history. Mars is from Hawaii and admits he isn’t used to the cold weather, but he is excited for the opportunity.

“I couldn’t believe it,” Mars said. “We were all watching you as a band last year when you performed with Beyoncé and we were just like, ‘Man, what if one day we get the call to do that?’ It definitely came soon, but just honored because some greats have been on that stage.”

Mars’ name is about to be added to that list of greats, but he is also bringing some friends with him — the Red Hot Chili Peppers. He admitted they were his only choice for who he wanted to perform with.

“I’ve been a fan of theirs for such a long time, I admire their career,” he said. “They’re a soulful band and not just musically, but as people — It’s an honor to be sharing a stage with them. They’re one of my personal favorite bands of all time.”

Past celebrity Super Bowl ads: Do you remember these ads? >>

The singer said there will be some big surprises in store, but he is not sharing before the big game.

“I want the world to watch, it’s only a couple of days, they can hold tight,” he said.