Amanda Knox has been found guilty in her third trial for the murder of Meredith Kercher, and needless to say she’s not happy about it. 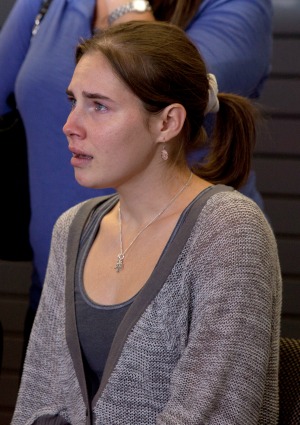 American student Amanda Knox has been found guilty of the murder of Meredith Kercher in her third trial, but she still steadfastly maintains her innocence.

Knox expressed her dismay in a statement to ABC News from her home in Seattle, Washington.

“I am frightened and saddened by this unjust verdict,” she said. “Having been found innocent before, I expected better from the Italian justice system.

“My family and I have suffered greatly from this wrongful persecution,” she said, adding that the verdict “is no consolation for the Kercher family… This has gotten out of hand.”

Knox, who was originally convicted of the 2007 killing only to be freed on appeal in 2011, was ordered to retrial in 2013 after an Italian court found the appellate ruling ignored key evidence and left unanswered questions.

A judge sentenced Knox to 28 years for the crime; her alleged accomplice Raffaele Sollecito was given 25 years. Another man, Rudy Guede, was convicted and sentenced to just 16 years after it was found he did not act alone.

However, it is unlikely Knox will see any jail time. Legal experts say she probably will not be extradited due to strict U.S. laws against double jeopardy, which were obviously flouted in this case.