It was a fun day of celebration for Helen Mirren. She was honored as Harvard’s Hasty Pudding’s “Woman of the Year.” 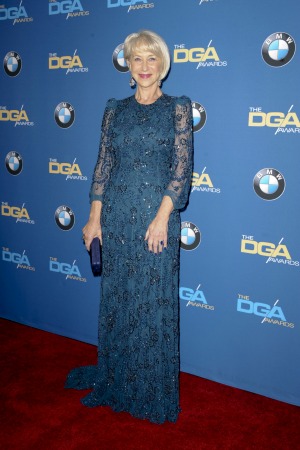 Is there anyone more appropriate than The Queen star to be honored as Harvard University’s Hasty Pudding’s “Woman of the Year?” That’s exactly what happened in Cambridge, Massachusetts on Thursday as Helen Mirren enjoyed the perks of the celebration — a parade, a roast and the ceremonial pudding pot.

The Hasting Pudding drama troupe is considered America’s oldest theatrical organization for undergraduates. They annually honor one male and one female performer for their contributions to the entertainment industry.

In a statement released earlier in the month, the 68-year-old Oscar winner said, “How very saucy of the Hasty Pudding organization to offer me their award. As someone who adores Pudding in all its manifestations… Suet, Christmas, Treacle, Bread and Butter, Yorkshire, Plum, Figgy, etc., etc., I am so looking forward to the famous Hasty Pudding.”

It sounds like she had a great time throughout the chilly day. Mirren was seen getting a tour of the Hasty Pudding clubhouse, riding in the parade and even showing off her dancing skills.

Mirren is in good company this year as Neil Patrick Harris will be honored as the group’s “Man of the Year” on Feb. 7. The annual tradition always falls during awards show season, so it’s become a mid-winter highlight for many celebrities.

Other past female honorees have included Sandra Bullock, Anne Hathaway, Sally Field and Meryl Streep. The first female to be honored was Gertrude Lawrence back in 1951.