The guys from Full House reunited for an incredibly funny skit on Late Night With Jimmy Fallon. And it involved music, humor and a bedroom. 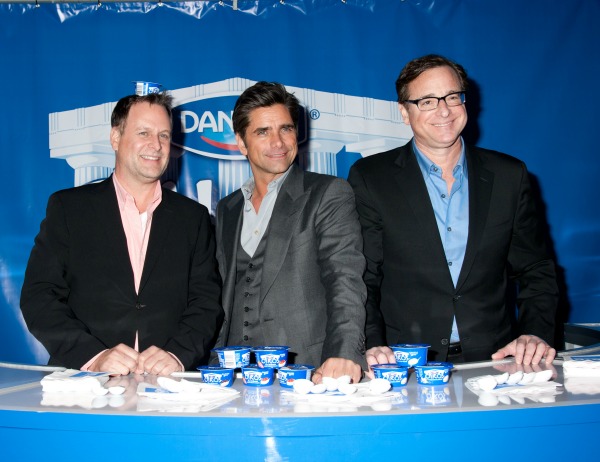 If you were a fan of the hit TV series Full House, then you are in luck because the guys — John Stamos, Dave Coulier and Bob Saget — reunited for a special appearance on Late Night With Jimmy Fallon on Wednesday night. And it was pretty awesome!

This reunion was even more exciting than the appearance the trio made for the Dannon Oikos yogurt commercial, which will air during the Super Bowl, and it’s pretty sexy.

Staying true to their characters, Stamos, Coulier and Saget, who you may know as Uncle Jesse, Joey Gladstone and Danny Tanner, appeared in some rather outrageous ’90s outfits complete with cringe-worthy wigs.

However, the outfits and wigs were not the only props to appear on the Late Night set, and we all know Fallon loves his props! There was also a bedroom that resembled that of Mary-Kate and Ashley Olsen’s childhood character Michelle Tanner.

The hilarious skit starts off with Fallon lying in bed before waking from a bad dream to call, “Dad, Dad, Daaad!” Cue Saget, who walks in to ask, “Jimmy, what’s wrong?”

Fallon then admits to being scared and stressed about leaving his show next month to fill the big shoes of Jay Leno on The Tonight Show.

Stamos and Coulier then enter the stage, showing off their horrendous ’90s-styled costumes. Stamos says, “We just heard some sad yet sappy, heartwarming music. Is everything all right?”

The trio then pretend to console Fallon about leaving Late Night and praise him for the great career move. Coulier says, “Only five people in history have ever hosted The Tonight Show, Jimmy. Comedy legends like Johnny Carson, [mocks Carson] ‘It’s so cold, I saw a dog stuck to a fire hydrant.'”

“Jay Leno [mocks Leno], ‘Have you seen this in the paper? Popeye the sailor drowns in olive oil.'”

The rest of the video skit only gets better.

You can watch the video here: