Miley Cyrus has given entertainment writers an abundance of material to work with in the past year, and through it all the message has been the same — she’s a talented girl with a great voice who doesn’t have to resort to tacky measures to get attention. She proved our point on Wednesday night and we officially became a fan.

Miley Cyrus set the tone for her Unplugged performance on Wednesday night on MTV by opening it up with the not-so-subtle message, “I’m gonna do my thang.” Dressed in a blond wig and an adorable country western getup that (gasp) covered her from head to toe, Cyrus belted out the song while slapping a small person on the rear and flirting with two guys in a horse suit, but that was as “edgy” as it got. The song is catchy, her vocals were strong and she looked fantastic.

Miley Cyrus skips the Grammys: What was she doing instead? >>

If ever there was an opportunity for Cyrus to gross us out during Wednesday night’s show, it was when she sang “Get It Right.” With lyrics like, “I been laying in this bed all night long, don’t you think it’s time to get it on, but we gotta get it right, we can’t get it wrong, don’t you want to feel this fire, before it’s gone?” Cyrus had a golden opportunity to shock us. The most provocative thing she did during this number was twerk against the horse. Seriously? That’s it? Compared to what we’ve been conditioned to see from Cyrus, this display made us feel like we’d tuned into the Cartoon Network. And guess what her lack of suggestive theatrics did? It gave us an opportunity to focus on how good she sounded and how great she looked. Huh. Has Cyrus finally “gotten it right?” 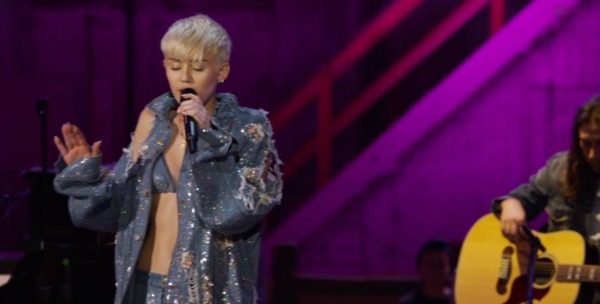 Cyrus left the nude underwear and camcorder from her “Adore You” video at home and sang a memorable rendition of her newest single (from her latest album Bangerz). This bikini top was the skimpiest thing she wore during the MTV special, and she kept the jacket on for the entire show. We don’t quite adore Cyrus yet, but we didn’t roll our eyes once or blurt out a single WTF during the mini-concert, and that is really saying something. 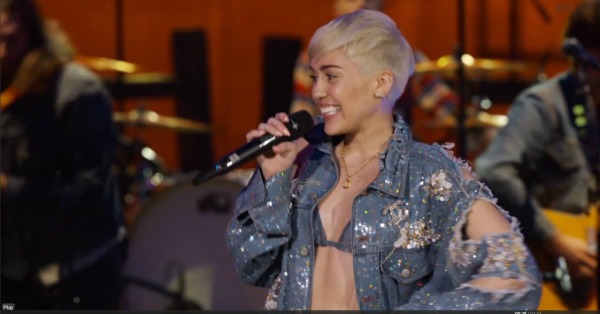 Cyrus told the audience she wanted to give them a taste of Nashville, Tennessee, with a song from “Aunt Dolly” (Dolly Parton — Cyrus’ godmother). Cyrus’ version of “Jolene” gives us an opportunity to point out what we realized for the first time last night — if Stevie Nicks and Dolly Parton had a daughter, she would sound like Cyrus. The “Wrecking Ball” singer switched it up a bit in the middle of the country classic by shouting, “That’s OK, I never trusted that b**** anyway!” If we may say, Cyrus sounded freakin’ ah-mazing during this song — she did her godmommy proud. 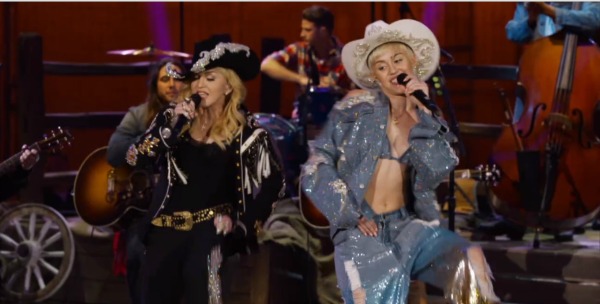 Cyrus’ show would have been a fan favorite without Madonna, but when Madge came out and the two superstars did a collaboration of “Don’t Tell Me” and “We Can’t Stop,” it more or less melted our faces off — again, bear in mind this comes from someone who’s not really a fan of either (before last night). Yes, there was a little grinding and a** slapping (we would have been disappointed if there wasn’t), but bar none our favorite moment from this duo’s performance was when they brought back Madonna’s legendary moves from her “Don’t Tell Me” video. Yesssssss. Night made.