Over the years, Rihanna has built up a reputation as a bit of a wild child. However, the songstress denies that she’s drunk all of the time and insists she’s just a regular woman. 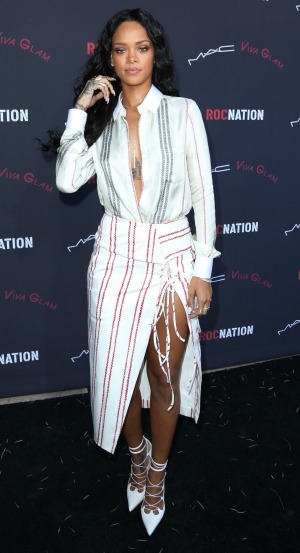 It is no secret that Rihanna has a wild side, and the songstress is often spotted having a good time and letting loose at all the swankiest parties.

But RiRi feels it’s the perfect time in her life to alter the public’s perception of her.

The media have reported on more than one occasion that the Bajan beauty loves to drink and allegedly enjoys smoking marijuana, but that apparently couldn’t be further from the truth.

According to USA Today, Rihanna revealed the real truth about her partying ways.

“I’m actually very laid-back. I love watching TV on a big old couch by myself. I love to swim in the ocean or the pool.”

RiRi may claim to be just a homebody, but who would blame her for wanting to let off a little steam every now and then? She has already achieved immense success in her musical career, but she also has a keen interest in clothing and cosmetics.

Rihanna attended the MAC Cosmetics Launch of Viva Glam Rihanna in New York City on Wednesday and was happy to speak about her passion for cosmetics as well as her successful collaboration with trusted brand MAC during the event.

The “Diamonds” hit maker confessed to E! News that her passion for makeup can be attributed to her mother. She said, “She had so much makeup when I was a little girl, and mostly red lipstick. I couldn’t wait to wear it. I put on makeup for the first time when I was 16 years old and it was so much fun. And the rest is history. Now I’m here sitting with MAC.”

Rihanna has been praised for her Viva Glam collaboration with MAC — with all proceeds going to the MAC AIDS Fund — she is not just another star who has endorsed the product without any personal involvement.

And even though she has a figure that almost every woman would envy, Rihanna reiterated that she’s just a normal girl who occasionally has body image issues. She confessed to E! News, “I do pick on my body.”

“It’s a thing that women do. We walk in front of the mirror and we look at our butt. Is it getting bigger today? Ew. It’s still flat,” she added.