Is Jennifer Lawrence engaged to marry boyfriend Nicholas Hoult? One magazine reports he popped the question, and she emphatically said yes! 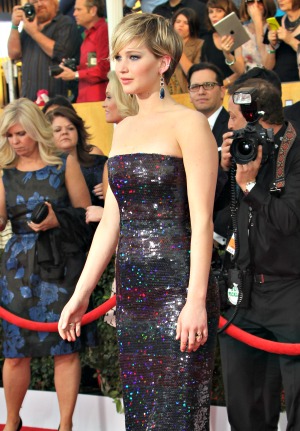 Jennifer Lawrence and Nicholas Hoult are engaged — at least, that is, according to OK! Magazine.

Now before you go and decide whether or not to believe if the reports are true, check out the photo below of the sparkling ring the actress was recently seen wearing.

An unnamed source kicked off the latest engagement reports by telling the mag Lawrence’s boyfriend, actor Nicholas Hoult, proposed over the holidays with a $250,000 token of love at her home while her family watched.

“All the family had gathered in the living room, enjoying the night before Christmas when Nick asked for everyone’s attention and began giving a speech to Jennifer,” the gossip-spreader explained.

“He stood up and took her hand, helping her to stand up as well. When she was on her feet, he knelt down and pulled the ring out of his pocket and asked her to marry him.”

According to the insider, the short-haired beauty was thrilled with proposal and “immediately started crying,” and then screamed, ‘Yes, I’ll marry you!'”

Coincidentally, perhaps, here’s an up-close look at the sparkling ring Lawrence wore on that finger at the 20th Annual Screen Actors Guild Awards on Jan. 18: 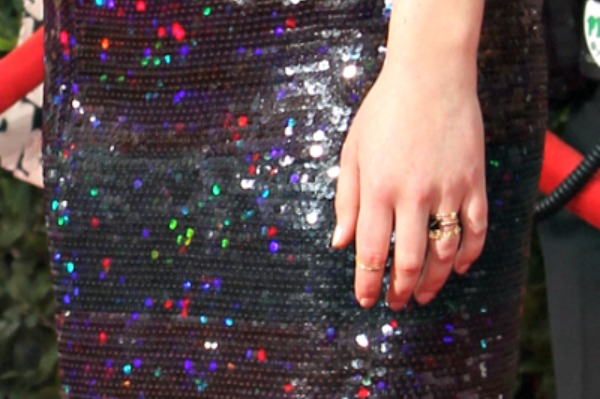 Despite the feel-good story from OK! Magazine, other outlets such as Extra and Gossip Cop report the Lawrence-Hoult engagement rumors are nothing but lies.

The acting duo will soon be together on the big screen for all to see when X-Men: Days of Future Past arrives in theaters May 23.

Do you think now is a good time for Jennifer Lawrence to marry?