The band Foreigner punked a New Jersey Buffalo Wild Wings to get customers psyched for the Super Bowl halftime show. We sat down with singer Kelly Hansen to find out about the experience and share the video so you can hear this new version of a favorite classic rock song.

We all remember this moment in the movie Magic Mike: It’s the end of the film and Mike (Channing Tatum) asks Brooke (Cody Horn) to go to breakfast. She tells him her favorite restaurant doesn’t open for hours, so what should they do in the meantime? Then the Foreigner song “Feels Like the First Time” starts to play and the movie ends on a super high and totally sexy note.

Given the power of that classic song, it’s no surprise Pepsi wanted to use the rock tune to get people excited for the upcoming Super Bowl Halftime Show that features performances by Bruno Mars and the Red Hot Chili Peppers.

We asked Foreigner lead singer, Kelly Hansen why this song from 1977 is still so popular. “It came out at time where it was absorbed into the fabric of society and it continues to live on rock radio and in concert. It’s a very up song, has great subject matter and people know it instantly because it’s just been in the air for 35 years,” he said.

We also got the skinny on what was going on behind the scenes during the Operation: Get Hyped for Halftime video. The long-haired hottie said it was a whirlwind of an experience.

“This whole Hyped on Halftime-scenario with Pepsi came together very quickly. We had to go to the studio and recut the song “It Feels Like the First Time” to make it “It Feels Like Halftime.”

The rocker said they had to fly straight from the recording studio to a Buffalo Wild Wings in New Jersey to shoot the video. But he admits he didn’t really know the game plan.

“What I was shocked by, when we got there, the director said, ‘See those double doors? You’re going to go through there.’ And I go, and what are we going to do? It was very off the cuff, very unrehearsed, we just went into this restaurant and started performing.”

Did they get it all on the first take? Not quite, said Hansen. “We did it several times in one day. We’d wait for a new batch of people to come in and then we’d go in and surprise them. It was a very wild, cacophonous type of thing.”

The hardest part about making the video for Hansen was trying to remember where all 14 cameras were, and making specific shots happen while not being blocked by people. “It was a very intense experience,” he said.

We asked him how he managed not to kick a Pepsi or stomp a chicken wing as he walked on the tables.

“Once we got into it, I realized those booths looked like the perfect place for me to stand. It was a way for me to get above the crowd so I can address everybody and see everybody. I was able to get up there and avoid most of the food and drinks. I think they comped the meals, saying if it had a foot in it, you didn’t have to pay for it.” 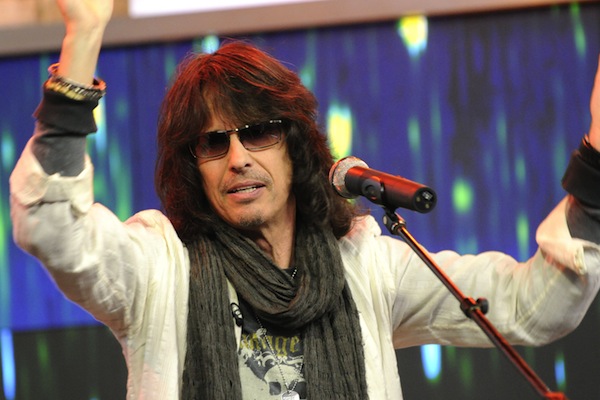 We were also excited to see that at 52-years-old, Hansen is still smoking hot, despite the hazards of being on the road and constantly touring. His secret? Kale.

“My rock-and-roll lifestyle now includes very green juice, I’m eating faro and lentils. Every year, I’ve got to work a little bit harder to maintain the same level of energy,” he said.

To the surprise of many, Foreigner’s music has been successful at reaching a whole new generation of young people, but how? Hansen claims it’s the internet and other technology that’s responsible for keeping the band’s music relevant.

“We’re in video games, Guitar Hero and some others. If the parents mention the band to their kids, they can go on Spotify or Pandora or iTunes, and they can look at the band. That’s something that couldn’t have happened just 15 years ago.”

So, the big question: Which football team does Hansen think is going to win the Super Bowl? The rock icon grew sheepish and admitted he didn’t feel he could predict the outcome. “I’m going to be flying during the game, so I won’t even be able to see it.” Oh, Kelly, you’ll be missing out!