It was a reunion from the 1990s, but Rihanna decided to join in on the fun. 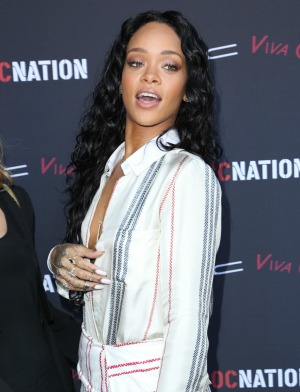 It was a meeting of two worlds Wednesday morning on the set of Good Morning America. Some of the former cast of Full House showed up, and so did Rihanna. The stars were there for completely different reasons, but they had some fun with one another while they were there.

5 TV families we wish we were part of >>

Rihanna was appearing on the show to promote the launch of her new project, MAC Viva Glam, and the Full House guys were on the show for all different reasons, but mainly to talk about their new Dannon Oikos commercial that will be played during the Super Bowl. The guys talked about their lives post-Full House, and said they’ve remained friends through the years, but don’t always talk about yogurt when they get together.

GMA took a photo of John Stamos, Bob Saget and Dave Coulier, and Rihanna interrupted with a couple of amazing photobombs behind the ’90s stars.

Stamos responded with his own photo with Rihanna. He seemed excited to get a much more serious photo with the singer, and posted his own photo to Instagram with the caption, “Finally met my childhood crush- @rihanna – wait, strike that reverse it. #hot”

The guys of Full House are seeing a lot of one another these days. Nearly two decades after it went off the air, Stamos, Coulier and Saget teamed up for a special commercial for Sunday’s Super Bowl. Coulier and Saget joined Stamos, who is the spokesperson for Dannon Greek Yogurt.

It is just one of the many anticipated commercials coming up for Super Bowl Sunday.

You can see Stamos next in his new film My Man is a Loser. Bob Saget’s last season the narrator on How I Met Your Mother is coming to an end, and his comedy album That’s What I’m Talking About was just nominated for a Grammy.