Trent Reznor is furious that his performance with Queens of the Stone Age at the Grammy Awards was cut off mid-song — but producers are saying there was nothing they could do about it. 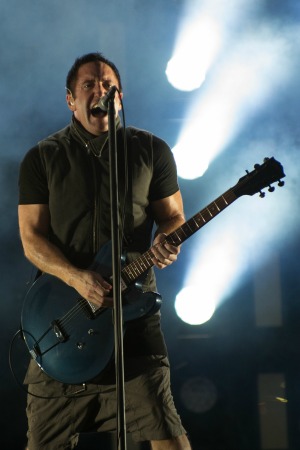 Nine Inch Nails frontman Trent Reznor is enraged that his performance with Queens of the Stone Age on Grammys night was cut off mid-song — but all he’s getting from show producers is a sorry-not-sorry non-apology.

Reznor and Queens of the Stone Age were set to cap off a night of stellar performances in a highly anticipated team-up, but viewers saw their screens fade to black in the middle of the song. Needless to say, an outspoken Reznor was not happy.

“Music’s biggest night… to be disrespected,” he tweeted. “A heartfelt F*** YOU guys.”

But showrunners say it just couldn’t be helped. In a big ol’ non-apology, executive producer Ken Ehrlich told The Hollywood Reporter, “I’m sorry he was upset.”

“I was really thrilled we were finally getting him on the Grammys. I did tell them we’d take it as long as we could. The number was about five, six minutes long, and we got to within a minute twenty of the end. We got as close as we could possibly get.”

The show was running 15 minutes behind by the end because of various delays.

Something tells us that Reznor is not going to graciously accept this “apology.”

As for the much-lauded mass wedding during Macklemore’s performance of “Same Love,” Ehrlich told the mag the idea actually came from his daughter — and having gay and straight couples wed was definitely done by design.

“That was from my daughter, who’s gay,” he explained. “She had read somewhere that there had been wedding proposals made during their shows because of that song. I first met with them last September over lunch to see what kind of people they were, and blurted out if they’d be willing to preside over actual marriages, and agree not to perform the song on TV anyplace else until the show, because I wanted to save it for us. They loved the idea, so I had it vetted by the Recording Academy and CBS, and there were no objections.”

“It had to be both tasteful and ‘fair and balanced.’ We wanted to make sure the artist felt their creative expression was respected. We booked an outside agency with experience in reality shows to find the actual couples who wanted to be married on live television. Then we got Queen Latifah sworn in as a deputy commissioner, which allowed her to legally perform civil ceremonies.”

Haters gang up on Macklemore in response to Grammy wins
Tegan & Sara live-tweeted the Grammys, and this is what happened
Kelly Clarkson says she bumps & grinds just like Beyoncé