After more than three decades of sold-out stages, Mötley Crüe has decided to call it quits. However, the band has a little surprise up its sleeve. 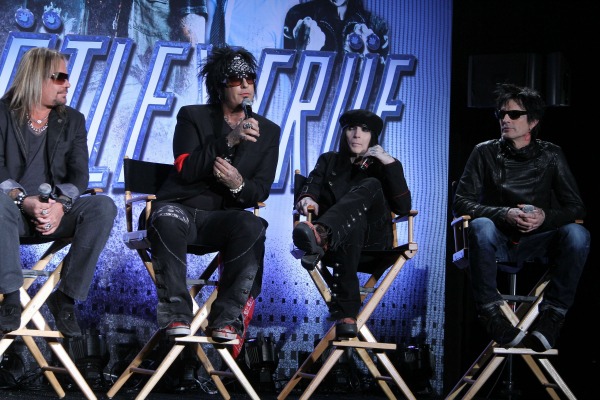 The band announced their retirement during a press conference on Tuesday afternoon inside Beacher’s Madhouse at the Roosevelt Hotel in Hollywood, California.

The rockers showed their funny side by revealing their retirement plans with faux headstones, one for each of the band’s members — guitarist Mick Mars, bassist Nikki Sixx, drummer Tommy Lee and lead singer Vince Neil. Their presentation was complete with an impressive poster that read, “RIP: All Bad Things Must Come To An End.”

Mötley Crüe has been in the music business for more than 30 years, and the entertainers have been hinting at retirement for quite some time now. The decision was finally made because the band wants to go out on top.

Sixx said during the press conference, “We’ve talked about this for years. It’s because we are on top, holding it together. We wanted to leave a legacy (and) we feel there are a lot of bands that don’t have dignity. We want to call it a day and be proud.”

This isn’t the first time Sixx has shared these views. In October, he revealed to Rolling Stone, “The thing about Mötley Crüe is we are a people’s band, we don’t kiss a** to the industry.”

“We believe artists should be in control of their own destiny and that destiny also includes when it should be done so that their fans can forever be proud.”

The “Girls, Girls, Girls” hit maker added, “Someone said to me the other day, ‘Won’t you be sad?’ I go, ‘No, I’d be sad if we were playing half-full theaters and only two band members were in the band.'”

“That would be sad. Sad is not taking your final bow in Los Angeles all together as four brothers,” Sixx said.

Although the group is retiring, it is not all bad news for fans. They will have plenty of opportunities to see the “Home Sweet Home” hit makers because the rockers have a massive farewell tour planned.

The Final Tour will span across 72 North American cities and should last about two years, starting on July 2, 2014, in Grand Rapids, Michigan. And there is yet another surprise — the Crüe members will be joined onstage by the infamous Alice Cooper.