Does Hugh Grant have a third love child? That’s what one British paper is reporting. He’s going to have a lot of college tuition to pay for. 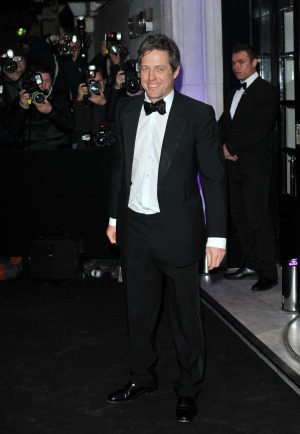 Actor Hugh Grant has been very busy over the last few years. His packed schedule doesn’t involve movie sets and scripts, it’s his love life that’s been on overload.

According to the U.K.’s The Sun, the Four Weddings and a Funeral star has fathered three children out of wedlock over the last three years. There are two different women who have had his children over a similar time period.

It was revealed that he had his first child, daughter Tabitha Xaio Xi Hong Grant, in September 2011 with his first baby mama, Tinglan Hong. They subsequently had a son, Felix, in December 2012. Even with two children between them, Grant explained that their relationship was “a fleeting affair.”

The 53-year-old actor sang her praises, though, “She is a good person, a nice person, funny, clever, great mother.”

Now another baby mama has surfaced thanks to the British periodical. Swedish TV producer Anna Elisabet Eberstein gave birth to a baby boy in September 2012. While she originally left Grant’s name off of the birth certificate, Eberstein added it in December 2013.

A source told The Sun, “Anna is being supported by Hugh all the way. She lives in a very comfortable property and knows that Hugh is there for her. Anna’s parents in Sweden know all about the relationship and she has their blessing.”

If you are doing the math, the two baby mamas did indeed overlap. Clearly, the Notting Hill actor has a hard time keeping it in his pants… or using birth control.

Grant has yet to comment on the latest news.