Selena Gomez is supposedly tearing up because of her former love’s new rumored girlfriend, Chantel Jeffries. 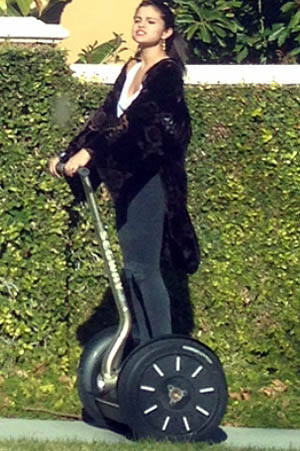 After learning of Justin Bieber‘s new supposed girlfriend, Chantel Jeffries, Selena Gomez is reportedly broken up by the unwelcome news.

When Gomez found out that Bieber had a new supposed girlfriend, she reportedly broke down in tears over her ex’s new love. Apparently, the “Come and Get It” songstress was out to dinner with Vanessa Hudgens at Craig’s restaurant in Los Angeles when she lost control of her feelings and started sobbing.

“She was crying over Justin and him being with Chantel,” an eyewitness for HollywoodLife.com said. “Vanessa was comforting her, hugging her and telling her to ‘forget about him.'”

After being devastated by the news that Bieber had been arrested for a DUI in Miami Beach last week, Gomez was hit with more bad news on learning who the pop star was with that night. Gomez was dismayed to find out Bieber left a Miami nightclub with Jeffries and that the two rode off in a yellow Lamborghini together.

News surfaced at the beginning of January that Gomez and Bieber got back together after the pair Instagrammed a photo of themselves in an embrace. However, the two are said to remain just friends, although Gomez has gotten increasingly concerned over Bieber’s alleged drug problems.

Meanwhile, Gomez’s good pal Demi Lovato claims that despite all that’s going on, Gomez is doing fine. During an On Air with Ryan Seacrest interview, Lovato revealed that she had spoken with the Spring Break star and gave her some words of wisdom, but she wouldn’t share them with the public.

“Any advice I had for her, we talked last night and — you know — it’s between us. But I love her so much,” Lovato told Seacrest. “[She is] strong. She’s doing really well right now.”