Queen Latifah offered a behind-the-scenes look at the preparations for her big night as a wedding officiant for 34 couples during the Grammy Awards. 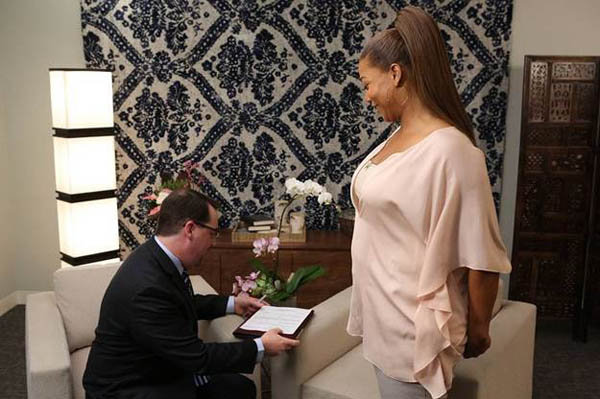 One of the biggest moments in this year’s Grammy Awards happened when 34 couples were married onstage by Queen Latifah. As a treat to her viewers, Latifah offered a behind-the-scenes look into her preparations for the big night.

After the big event went down on Sunday night, the TV host was happy to share her experience all the way from being deputized by the Los Angeles County Clerk to actually officiating the much talked-about Grammys marriage ceremony.

In the clip, Latifah is first shown being deputized by the clerk as she recites a sworn statement. Next, she is seen as she prepares for the big night backstage at the Staples Center and then again as she walks onto the stage itself during Macklemore’s rap song. As Latifah officiates the wedding and declares the couples married, Madonna also walks up to join in the ceremony celebration.

Then, Latifah takes all the couples backstage again and helps the newlyweds with their paperwork and poses with them for some photographs.

“Wow, that’s the first time I’ve gotten to see it,” Latifah told her audience as the behind-the-scenes look came to an end. “It’s so incredible, my mind is just blown. I’ll never, ever forget that experience.”

Latifah wasn’t the only one who was overwhelmed by the big event. During his performance as the wedding ceremony took place, Macklemore was also deeply taken in by the whole experience.

You can watch Queen Latifah’s exclusive video below.