Toby takes a big step, Bay learns a few valuable lessons from Teresa, Daphne and Sharee alternate between fighting and getting along, Regina discovers the value in standing up for herself and Emmett struggles with a big decision in the episode titled “Fountain.” 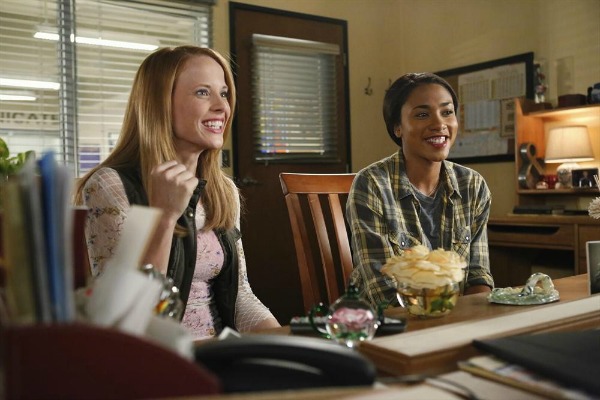 With a few fits and starts, and even a fight or two, this episode of Switched at Birth actually found nearly everyone in a positive place by the time it was all over. In my review of last week’s episode, I noted that everyone was a lot happier than they were in the premiere and that joy grew a couple sizes in this episode, too. That probably means everyone is in for some major drama soon, but let’s all enjoy it while we can, shall we?

Switched at Birth preview: Will Emmett narc on his friend? >>

I know I’ve been kind of hard on Toby for a while so it’s with great pleasure that I announce that his story was my favorite this week. I practically stood up and cheered when he told his mom he wanted to move out on his own. Then I felt like cheering harder when he chose to do it without his parents’ help. Kathryn getting upset with him for not checking in with them was so ridiculous that it was almost comical, but I guess that’s just the way moms are. It was nice to see she admired his decision in the end.

Bay’s journey to become an artist is very appealing to me, probably because I understand a lot of what she’s going through. It’s rough to have a mentor shoot down your hopes, but Bay handled it like a trouper and I think in the end, Teresa was pretty impressed with her gumption. That being said, I did appreciate Teresa telling Bay to take the recommendation letter. I’m all for gumption, but hey, why not take the help if it’s offered, right?

Daphne and Sharee really seemed to be on their way to becoming friends, but of course, that had to be ruined by Matthew. His plans to be a vandal and hope the new kids would be blamed was not cool. I have a feeling Daphne and Sharee will get back to where they were once all the commotion dies down, and I am so proud of Emmett for turning Matthew in for what he did. I totally expected that story line to be dragged out longer, so it was a relief to see it resolved. I suppose there could be revenge coming Emmett’s way, but he’s a strong guy, so I don’t see him putting up with something like that for long. One good thing that came from all that was Daphne and John making up, which was so nice to see.

It’s going to be fun watching Regina and her new boss. Wes said he had kids, which means he could be married, too, so maybe I was wrong about the possible romance between them. Personally, I’m totally OK with that as I think there will be plenty to see just from them being co-workers.

Daphne comparing her mom running into a guy at a trash bin to a Sandra Bullock movie. I think I may have seen that one.

Toby asking his mom not to freak out or burst into tears before talking to her about moving into his own place.

“I can’t really talk and drive at the same time. Unless you’re up for a really scary ride to school.”

Daphne and Sharee finally getting along on the field.

“You know what? You’re at your best when you don’t give a crap.” — OMG, I love that so much. I seriously want to have that printed up on a T-shirt.

“It looks like something my stoner cousin made at Ren-Faire.”

“Are you aware you say every statement like a question?”
“I do?”

“I’m not letting unhappy people decide what I get to do.”

Daphne and John making up over a mini game of field hockey.

Do you think Toby will make it on his own or will he end up going back home when things get too rough?