Justin Bieber is enjoying a fun beach vacation in Panama after his DUI arrest in Miami. 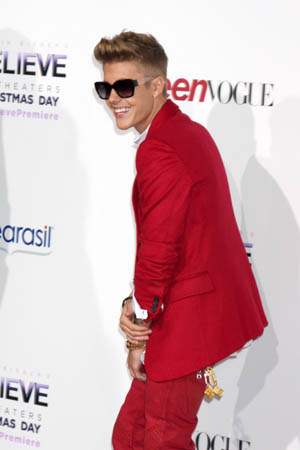 An arrest and a DUI charge won’t get in the way of Justin Bieber‘s vacation plans. The teen pop idol didn’t waste any time after his run-in with the law in Miami Beach, Florida, and jetted off to Panama for some fun in the sun.

Just mere days after Bieber appeared in court to face the judge for his DUI and resisting arrest charges, the singer hopped on a plane and headed to Panama for some warm relaxation. Complete with his large entourage and rumored new girlfriend, Chantel Jeffries, the Biebs resurfaced walking on the beaches of the Caribbean country’s Pacific coast.

The 19-year-old was first seen strolling on the shore with a few bodyguards, a bikini-clad Jeffries and a few pals. While Bieber sipped from a water bottle, one of his friends carried what looked like a beer bucket. Next, the “Boyfriend” crooner was spotted getting in a pontoon boat and heading out on the ocean with his large group of companions.

Several Beliebers gathered by the surf to wave farewell to the Canadian star as he headed into the open waters with his pals. Going along for the boat ride was Jeffries again, wearing another skimpy bikini and looking quite content to be by Bieber’s side.

According to earlier reports, Usher has also joined Bieber on his Panamanian vacation, although his motives are said to be those of a mentor. Apparently, the R&B singer is trying to help Bieber with his drinking and drug problems, attempting to talk some sense into the singing sensation. No word on how that intervention is going, however, or if it’s even going at all.

Bieber and his group have been staying at an action sports resort located in Nitro City, which is right at the tip of the peninsula on Punta Chame beach.