You can’t keep a good athlete away from the Winter Olympics! Lindsey Vonn will be watching the games live from Sochi as a correspondent for NBC. 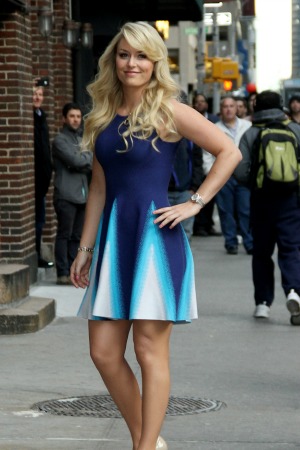 She might not be skiing, but she will definitely be in Sochi, Russia. Lindsey Vonn is headed to the winter games thanks to NBC. On Monday, the network announced that the three-time Olympian will be joining their broadcast team.

The 29-year-old athlete will be working for NBC Sports and The Today Show as a correspondent both before and during the Olympics. This comes as no surprise to many after NBC Olympics executive producer Jim Bell hinted that they were working on a deal with the elite skier.

This adds to the growing roster of former Olympians who are set to assist lead anchor Bob Costas with the two-week global event. Other familiar faces in various sports who will be working for NBC include figure skater Tara Lipinski, speed skating star Apolo Anton Ohno and freestyle skier Jonny Moseley.

Vonn dropped out of the Olympics race on Jan. 7 after being plagued with complications from her 2013 knee injury during a super-G run at the World Championships in Austria. She reinjured herself this season and subsequently had surgery in mid-January.

Brian Boitano: “We have to be careful” in Sochi >>

She’s been keeping fans posted about her rehab and progress on her Instagram page.

While she may have to hobble around Sochi on crutches, her injury clearly won’t keep her away from her sport’s biggest event. Vonn is planning to return to the slopes for the 2014-15 season in time for the World Championships in Vail, Colorado.

She’s scheduled to appear on Tuesday’s edition of The Today Show to talk about her role and her injury.