Despite the recent rumors, Peter Facinelli and Jaimie Alexander are not engaged to be married, a new report confirms. 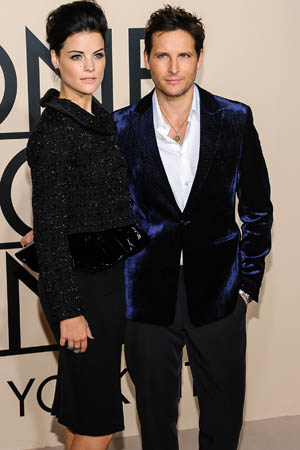 After rumors ignited that Peter Facinelli and his girlfriend Jaimie Alexander got engaged, her rep has debunked the stories, saying the couple is not getting married anytime soon. “No news to report, however, as there’s no engagement.”

The 29-year-old actress caused the rumor mill to go on overdrive when she was seen shopping while wearing a band on her left ring finger. However, the Thor star was also sporting several other rings on the same hand and having the band on her wedding digit was “solely a fashion accessory,” Alexander’s rep added.

Facinelli and Alexander have been very close since last year when they began dating while starring together in Nurse Betty. It wasn’t long before that that the Twilight hunk had split from his wife Jennie Garth in January of 2012. The 90210 alum and her ex finalized their divorce over a year later, in June of 2013.

Apparently, Garth had a hard time with the divorce at first, although she admitted to growing apart from Facinelli due to his busy filming schedule and time away from each other.

“He would do everything he could to fly back every weekend,” Garth said when she opened up about the split shortly after it was announced. “It took a real toll on our marriage.”

Jaimie Alexander geeks out in Thor >>

The former couple shares three daughters together — Luca Bella, Lola Ray and Fiona Eve — who they are co-parenting via joint custody.

In the meantime, Facinelli seems to have grown very close to his new girlfriend, although a proposal and marriage to Alexander may still be some time away.