The Bachelor Sean Lowe married his best friend and love of his life Catherine Giudici on Sunday. Find out the deets about their lavish ceremony. 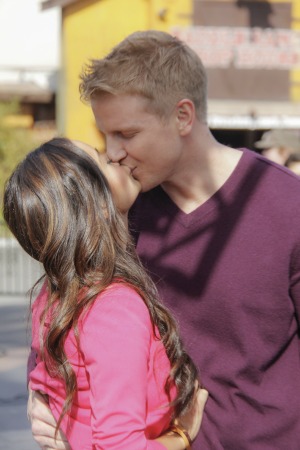 He may have been one of America’s most eligible bachelors, but sorry ladies, Sean Lowe is officially off the market.

Lowe said “I do” to his blushing bride Catherine Giudici on Sunday and fans were in for a treat — the couple opted to marry on live TV, with Lowe’s father Jay officiating the ceremony.

The smitten pair’s ceremony was televised live on ABC from their lavish reception at the Four Seasons Resort Biltmore in Santa Barbara, California.

According to the Daily Mail, the 30-year-old former bachelor revealed his decision to share their ceremony with the world. “Our relationship started on TV and we really feel like The Bachelor fans are so passionate and so invested,” Lowe explained.

“And it doesn’t hurt that they give us a five-star wedding either,” he joked.

Lowe also shared his thoughts on Instagram on Sunday morning, writing a beautiful message that read, “Today is the day I marry my best friend.” The note was accompanied by a picture of when the pair first met on the hit ABC show The Bachelor.

They met on Season 17 of the show and have remained traditional by waiting until after their big day to consummate their relationship.

The 27-year-old beauty shared her views on her relationship with The View saying, “I feel like it was the right decision for us and we’re really happy. It’s another benefit of getting married. It’s all-encompassing”

And their relationship is healthy — they are willing to speak about whatever issues they face. “If something bothers us we talk about it,” Giudici said.

The future Mrs. Lowe could not wait to walk down the aisle and happily shared her wedding preparation pictures with her appreciative fans. Showing off her stunning brunette hair in a romantic curled updo, the beauty wrote, “Getting reading in my @loveophelia #mrslowe robe! #thebachelorwedding @fssantabarbara #countdownlowedown”