Kathy Griffin finally wins her Grammy Award! The comedian also thanks this week’s biggest newsmaker in her acceptance speech. 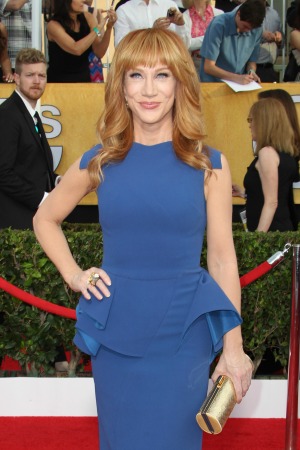 Even though Justin Bieber is far away from the Grammy Awards tonight, he was still a part of the ceremony — thanks to Kathy Griffin. The comedian finally won her first Grammy Award for Best Comedy Album after five previous attempts.

The 53-year-old made sure to include this week’s biggest headliner in her speech.

She thanked the “Boyfriend” singer “for giving me my happy juice earlier.”

Of course, Griffin was referring to the Biebs’ penchant for sizzurp, which is a mixture of a prescription-strength cough syrup (containing codeine and promethazine) and a soda like Sprite or Mountain Dew.

While the troubled 19-year-old pop star is laying low in Panama after his Miami arrest late last week, Griffin is clearly celebrating tonight. She tweeted her excitement to her followers.

After her big win, she hit the red carpet to talk with E! News host Ryan Seacrest. She mentioned who she had thanked in her speech.

Griffin said, “I made a very poignant speech. I did mention you in my speech [referring to Seacrest]. I thanked you for being someone who has helped my career inadvertently.”

The My Life on the D-List star has used the American Idol host as the butt of many of her jokes in her stand-up routine. Seacrest has been a pretty good sport about it over the years.

“I thanked you. I also thanked Oprah, Paula Abdul, Michele Bachmann, the entire Tea Party — you’re in really good company — [and] Justin Bieber for giving me his ‘calm-down’ juice,” she continued.

Even though Griffin was all jovial on the red carpet, she has also been in mourning this week. She lost her brother Gary to cancer just four days ago and announced the news on Facebook.

It was definitely a bittersweet week for the funny lady.