We’ve been a fan of actress Erica Tazel since we first caught a glimpse of her as Deputy U.S. Marshal Rachel Brooks on FX’s gritty hit series Justified. Not surprisingly, the Texas beauty totally won us over when she filled us in on life (and death!) on the Justified set, what it’s really like working with hunky Timothy Olyphant and how she made the leap from biology major to a major role. 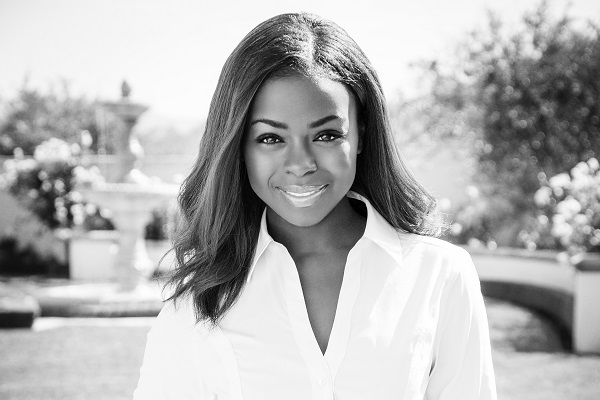 SheKnows: You started off premed in college, and now you’re starring alongside Timothy Olyphant in a hit TV series. Can you connect the dots for us?

Erica Tazel: It’s actually a really long story, but I always say acting chose me. I didn’t know when I was a little girl — at least not on a conscious level — so essentially I went to a performing arts high school. It was literally the best four years of my life… I did everything… stage management, lighting design, set design, and ended up focusing on acting in my last two years. It was a great jumping-off point, but I never thought I would use it again.

So then I left and went to Spelman College, where I entered as a biology premed major. Fast-forward to my sophomore year: I get an invitation to see a show in the theater/dance department, so I took a study break and went over. And I walked in the theater and I literally started crying. It completely caught me off guard, and the only way I can really describe that experience is that I felt like I had come back home.

So I went to talk to the chair of the department, told her about my experience and asked if she could help me. She had a cigarette in one hand and a Granny Smith apple in the other and she said, “Well, it seems like you’ve come to your first crossroads as an artist, where you choose stability or you follow your heart.”

ET: And I decided to follow my heart. I got the major coursework, and I figured out a way I could finish the theater major undercover while I continued to take math and science classes. Then my junior year, I’m having the next freak-out, and this professor comes and she gives me pamphlets to three acting conservatories: NYU, University of San Diego, and Yale School of Drama.

But because I was a poor college student, I could only afford one application. So I chose to go to New York to do the audition just to feel the city and to feel the school, and when I entered on the fifth floor of 721 Broadway, it was the same feeling — I felt like I was at home. I was like, “Yep, this is where I’m going to go, and I’m going to come here on a full scholarship!” You know, ignorance is bliss, because I didn’t know like 3,000 students were auditioning for 18 slots (laughs). And so by some miracle of God, I got accepted on a full scholarship.

SK: I love stories where leaps of faith pay off! Well, you’ve had a lot of bit parts in amazing shows like Bones, Law & Order, Without a Trace… were you very selective when you first started out?

ET: While you’re in New York, you go out for the shows that are shooting in New York at that time, and if there’s opportunity and offer… I was like, “Heck yeah, I’ll be on Sex and the City as a dance teacher,” or “Sure, I’ll cry and run down the street with my baby on Law & Order: SVU.” I think between Law & Order: SVU and Without a Trace, those were probably my two most favorite TV jobs.

SK: Did you always know you wanted to be in TV?

SK: What was it like working with such veteran TV casts?

ET: Mariska Hargitay [Law & Order: SVU] is just an amazing leading lady, and there are just some things she said to me on those few days on her set that I still carry with me today. And Marianne Jean-Baptiste was the series regular on Without a Trace that I worked with the most. I was a huge fan of hers before getting on the show and, you know, just watching how she managed and navigated her work on set, I kind of stole that from her, too.

SK: Well, let’s get down to the nitty-gritty — Justified. Your character, Rachel, is a U.S. Marshal. How the heck did you get in the mindset to play that role?

ET: We have a great technical adviser named Charlie Almanza who used to be a deputy in the U.S. Marshal service, so he’s been very instrumental in keeping me from looking like a girl with a gun. I just didn’t want to look like a girl with a gun! (laughs) When I first got the role, I wanted gun training and I wanted to do a ride-along. And I can’t remember if it was because there was an incident here in LA during a ride-along, or if it was something to do with Sept. 11, but they wouldn’t allow that.

And then I was like, “OK, is there a way I can go to Glynco [the location in Georgia of the Federal Law Enforcement Training Center]?” I wanted to just put myself through the ringer of that, ’cause everyone has a way of walking: A fireman walks a certain way; a dancer walks a certain way; police officers walk a certain way… you know, whatever it is. And I did not want to look like a girl with a gun.

But Glynco had to be shut down to the outside, so I just started working with Charlie and he arranged a bunch of opportunities around the city to go to gun ranges. We started there.

SK: You’re from Texas, right? Did I hear right that you consider Rachel more of a city girl than you are?

ET: I am… I’m a Dallas girl all day. I mean, I definitely love my city, but I also have those times where I just want some crickets and to see the stars in the sky at night. But I’m a nice blend of city and country, and I think… Rachel’s sort of been able to assimilate more to being a city girl. Even though she’s from Tennessee, I feel like she’s a little more citified than I am! (laughs)

SK: Sadly, last season did not end the best for our city girl. Is there anything you can tell us about last season’s finale?

ET: Gosh, the season finale… I thought it was a great episode. And, you know, in true Justified fashion we tied up some loose ends and untied some others to get us into Season 5. I will say we’re going to take a departure from where we left off. I mean, obviously there’s the Detroit Mafia, there’s all the stuff going on with Ava and Boyd, Raylan has a kid coming — a lot of scenarios come to a head in Season 5.

SK: Any hints about the direction the show is ultimately headed?

ET: I will just quote what our showrunner said at the Television Critics Association Panel. With the loss of [screenwriter] Elmore Leonard over the summer, the writers decided that they really wanted to honor Elmore in a bigger way. And there’s a family in a lot of his books by the name of Crowe, and in previous seasons we’ve met one of those — the cousin, Dewey Crowe. So they decided and made a clear decision they wanted to focus on Dewey and bring in some of his other family members.

What that means for Rachel in particular is that you are not going to see her a lot this season. You know, we won’t pick up on any of what was left off last year with her. So it’s going to be a very interesting season — a lot darker this year, a lot more violent. You know, we’ll see who makes it out of Harlan alive this year. (laughs)

SK: Give it to me straight: What’s it like working with Timothy?

ET: Tim‘s incredible — he’s an incredible artist… who’s not bad to look at. (laughs) He’s like a bottle of wine, you know? He’s getting better every day. I will always say this and it’s true and it never gets old: We’re extremely lucky to have him as a leading man. I mean, he really has led the show in more ways than words can express and than he’ll probably ever get credit for.

But he’s fun — he likes to keep it light, he loves a good joke — and I’m really fortunate to have him as the lead of my first series, for sure. He set the bar very, very high. He’s pretty awesome, inside the work and outside the work. He’s just an all-around great guy.

SK: The network recently announced Justified won’t continue past the sixth season. Anything big in the works or is it just way too far out to tell yet?

ET: We’ve known for a while, so having an official announcement one can sort of plan. Last year, I did a bunch of theater on my break, and it was nice to go back to that. And there are some things I have my eye on this year that my fingers are crossed about. So it’s a little too early to say — that’d be presumptuous at this point — but we’ll see how everything pans out. I’m looking forward to seeing what my next home after Justified will be.

SK: You mentioned Kerry Washington. Can you see yourself sinking your teeth into a role like Olivia Pope?

ET: Absolutely. I mean, what’s happening to her in that role is just a dream. It’s very much like Tim, where you look at the person in the role and you’re like, “Yep, you were born to do that.” And I believe that all of us have that opportunity and, when given to us, people do rise to the occasion. So absolutely, if something like that were to come, I feel pretty confident that I could shine and play very well in that role.

SK: Well, we’ll keep our fingers crossed too. I know you’re super-busy, but do you have anything in particular you enjoy doing in your downtime?

ET: I do! This will be my fifth year working with a wonderful organization here in LA called Get on the Bus, and they reunite children with their incarcerated mother and father for Mother’s Day or Father’s Day. I coordinate a Father’s Day bus, and I’ll get my family packets in about two weeks.

We provide a free trip to the family, and we do everything from the prison clearance paperwork to fundraising for the bus to breakfast, lunch and dinner. And we do travel bags — the kids get teddy bears and photos with their parents to bring back home — and coordinate the dads writing letters the kids will get on the bus ride back home. It’s just a tremendous opportunity to go on this incredible journey with these incredible families and these incredible children.