We don’t know which is more exciting tonight: Katherine’s fate revealed or Klaus’ return to town. Who are we kidding? Klaroline all the way! 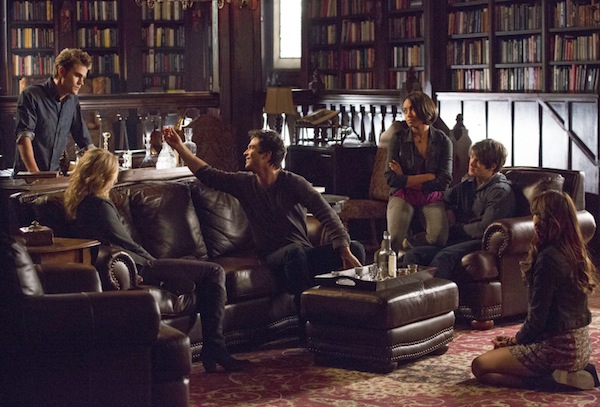 This episode of The Vampire Diaries started out a little slow to be frank. We’d already seen most of it from the countless promos that played throughout the weeks leading up to the mid-season return.

The gang gets together and drinks a lot of bourbon, rehashing all the horrible things Katherine (Nina Dobrev) has ever done to them while they wait for her to die. Our favorites from the other side even make appearances for the 100th Episode fun including Alaric, Jenna and Vicki.

As Katherine is on her deathbed, she flashes back to her life before becoming a vampire. It’s sad, but we’re still Team Damon (Ian Somerhalder). It’s not like she hasn’t brought it on herself.

And then things take a turn for the unexpectedly awesome.

WARNING: Spoilers of tonight’s 100th Episode of The Vampire Diaries below. Do not continue reading unless you want all the dirty details. (And by dirty, we mean Caroline is probably still pulling leaves out of her hair.)

Maybe it’s because we know there’s no The Vampire Diaries without Elena (Nina Dobrev). Or maybe it’s because our eyes are still spinning back to Klaus’ (Joseph Morgan) sly grin before he shoved Caroline (Candice Accola) against that tree. Either way, Katherine’s impending death pales in comparison to the fact that Klaroline finally made it happen. Sure, Klaus had to promise never to speak or see her again but, come on, let’s be real, the guy is not known for keeping his promises.

If it was finally going to happen (and trust us, it did), the 100th Episode was the perfect time to mark the Klaroline hookup. Klaus strode into town with Rebekah (Claire Holt) in tow after hearing Katherine was near death. Where Tyler failed to impress, Klaus promises to drop the revengenda if Caroline agrees to finally spill the truth about her feelings for him. Cue the getting hot and heavy.

The episode could have ended right there, and I don’t think anyone would have complained. It was just an added bonus that we got another half hour of The Vampire Diaries’ twists and turns.

Because, of course, Rebekah also came with a little parting gift in the form of returning Tyler to Mystic Falls. The look on Caroline’s face was priceless. Those two had better not get back together. We are so over Tyler!

We should have known there were sinister things brewing because the moral of the episode was definitely that Katherine is a survivor. They kept showing her in this brilliant light of just trying to make it through all these horrible things that happened to her. We mistakenly thought it was because she was going to die. We feel like idiots that we even played into it for a minute. They had our hearts all melting when Stefan (Paul Wesley) changed her visions so that Katherine finally had the chance to hold baby Nadia.

Then Katherine grabs Elena, says the travelers chant and transfers herself into Elena’s body only seconds before Katherine’s original body dies. The girl totally tricked us into believing she was going to finally go in peace. Ugh! We should all go take showers now to cleanse any remaining filth of Katherine pity we may have felt.

To make matters worse, Nadia was in on the whole plan. The two had been plotting this little body snatch from the get go. Like mother like daughter! Nadia gets all upset when Katherine goes off on her poor me survivalist mode, but Nadia is just as bad!

Now we really want to see Katherine finally get what she deserves.