Check out sneak peek videos from the next episode of Switched at Birth, called “Fountain,” airing on Monday, Jan. 27 on ABC Family. 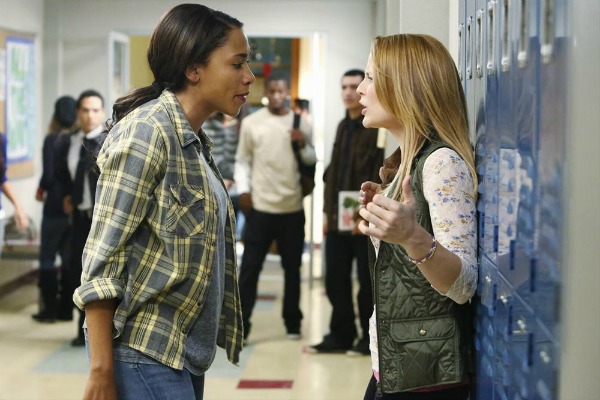 In the last episode of Switched at Birth, some people had a couple of good days, while others had a couple of bad days. In the previews for the next episode, called “Fountain,” it looks like some of those bad days are about to get a whole lot worse.

So far this season, Daphne has had the challenge of doing her community service for the mistakes she made last season. But while that hasn’t been exactly fun for her, it did lead to a new friendship, which was nice. Unfortunately, things at Carlton haven’t been going as well and Daphne has had some trouble with a new student named Sharee. In the last episode, Daphne lost a bet and agreed to drive Sharee to school.

As for Regina, she has been stressing out about starting up her new business and in the last episode she found herself helping out her cousin with a nursery design with no budget. That led to Regina getting clever and having to do a little bit of dumpster diving to find design supplies. There she met a project manager guy and, depending on how you viewed the scene, it could have looked like there were sparks there.

Finally, Emmett discovered the culprit behind the vandalism at Carlton, but it wasn’t one of the new kids. Turned out it was a deaf kid trying to make it look like the newly-transferred students were guilty so that they would get blamed and kicked out of the school.

So that’s where some of the characters were left off at the end of the last episode, check out some preview videos below to find out what will happen on the next episode which airs on Monday, Jan. 27.

Here is the preview of the episode, which shows that things are definitely going to get worse between Daphne and Sharee.

In the first clip from the episode, we see Regina stressing out about trying to find new clients, while Daphne is rushing out the door to pick up Sharee.

In the second clip from the episode, we see Daphne and Regina’s first carpool together, which looks pretty tense.

In the final clip from the episode, we see Emmett telling Travis what he knows about the school vandal and getting stuck with a tough decision.