On the next two episodes of Beauty and the Beast Vincent will have to rescue Cat, Tess and Tori from hostage situations at the precinct and then he’ll be faced with J.T.’s kidnapping. We’re in for some tension! 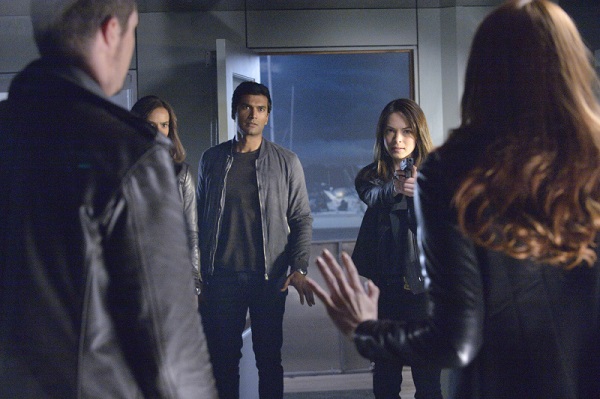 The CW has released photos and summaries of the next two episodes of Beauty and the Beast and it looks like fans might be pleased with the way the story arc is set to progress. Be warned, there are spoilers in this post, so if you don’t like to know what’s coming, then look away.

The best places to find shirtless men on TV >>

On the Monday, Jan. 27 episode “Held Hostage,” Tori (Amber Skye Noyes) is in possession of yet another rare necklace that criminals want to get their hands on. It doesn’t seem her dad did her many favors before he died or after! The bad guys want it so badly they take Tori, Cat (Kristin Kreuk) and Tess (Nina Lisandrello) hostage in the precinct.

Poll: Are you prepared for VinCat’s woes on Beauty and the Beast? >>

Apparently, Vincent (Jay Ryan) is their only hope of rescue, but to save them, he might have to risk showing the entire police force the beast inside. Now that he’s unmasked himself and gone public, that’s a much riskier move than it would have been before. Will he do it to save Cat and the others? Take a look at the photos: 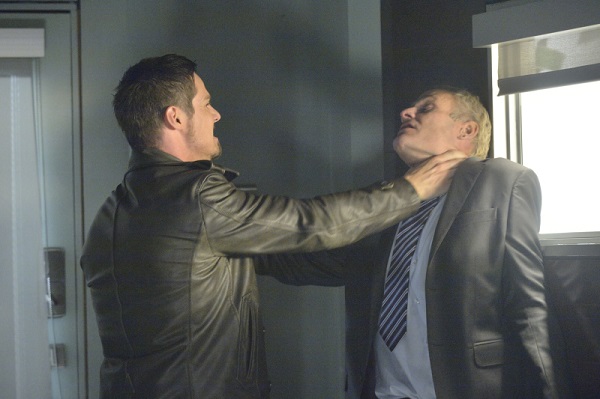 This guy is alive — but not for long. 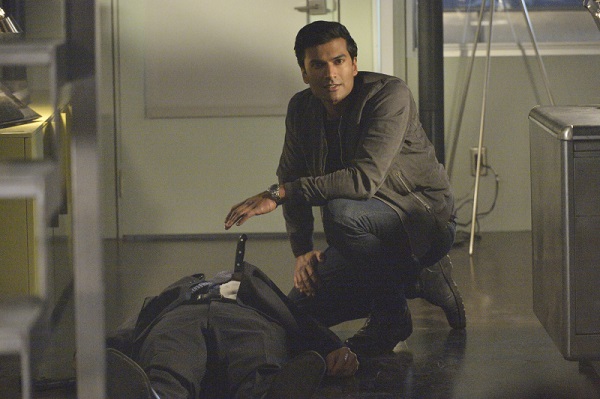 Oh no. The poor guy is dead. There’s a knife sticking out of his chest. Who did it? Vincent was just strangling him — he has no need for knives. Will Gabe (Sendhil Ramamurthy) pull it out? 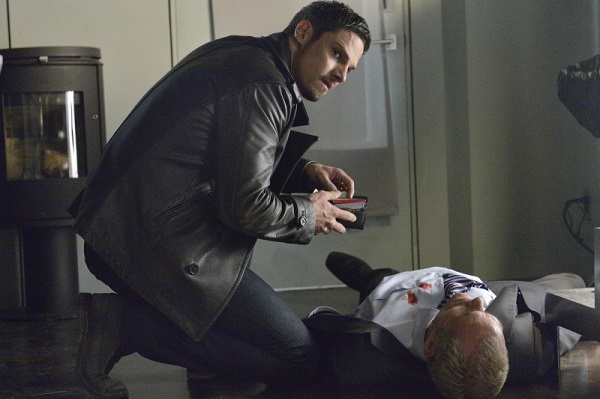 Vincent has that look on his face; the one of determination. Is he taking his money? Nice! The knife is gone. The wound didn’t bleed much. 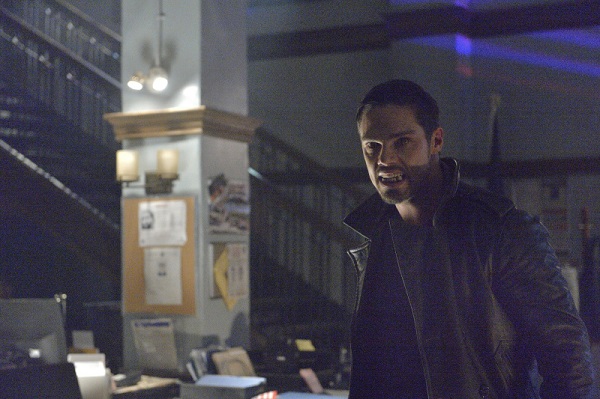 The shot above is grainy, leading us to believe Vincent is in the dark. There are some deep shadows as well. There were no shots released of the hostages being held, but he must be in the precinct trying to save them here. Go Vincent!

On the Monday, Feb. 3 episode “Recipe for Disaster,” J.T. gets kidnapped. There’s no rest for the weary on Beauty and the Beast. Cat and Vincent decide to work together to try to find him, but Tori takes it upon herself to intervene with “fatal consequences.” (Those are not my words.)

In the past, beasts have been known to have some healing powers, so we could be in for a bit of trickery here, but the words and the photos seem promising. We’ll also meet a stranger (Tom Everett Scott) who is rescued along with J.T. (Austin Basis), who’s not only a friend of Agent Dana Landon (Elisabeth Rohm) but might hold some answers for Vincent about his past. You didn’t think J.T. wouldn’t be rescued, did you?

Prepare to be dazzled: 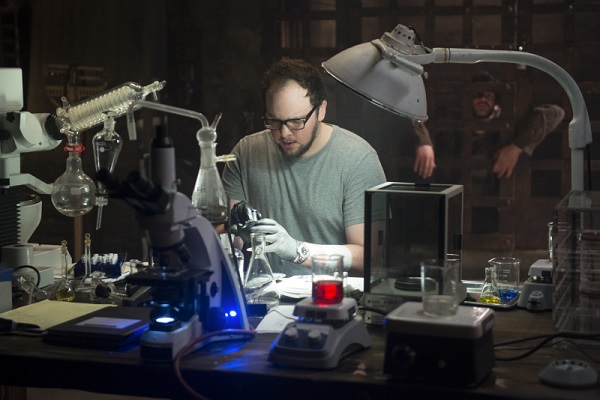 It’s J.T., doing what he does best: cooking up a recipe — for disaster. Is this what gets him kidnapped? 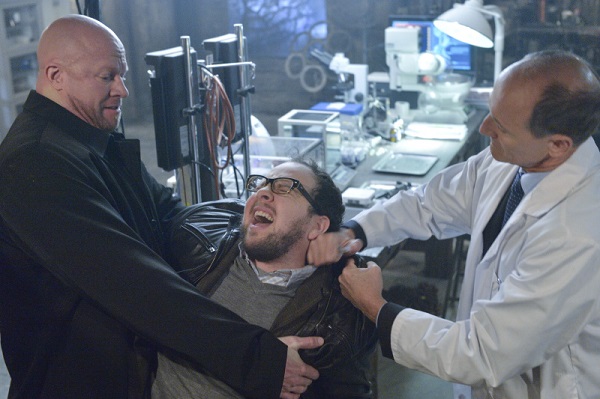 Ouch! Why do they always have to inject stuff right into the neck? Notice this is some time after J.T. was cooking, as he has on layers of clothing in this photo. 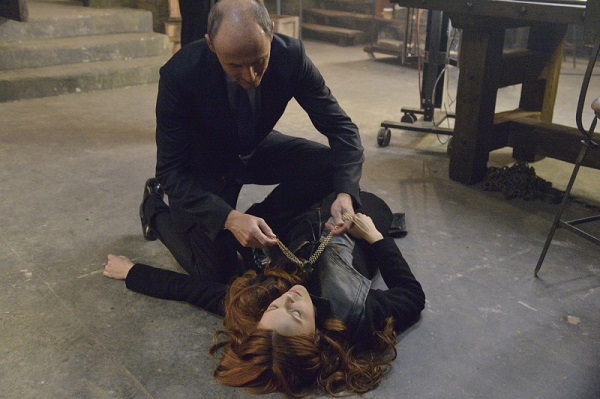 Tori’s down! Is this guy trying to steal yet another precious necklace belonging to Tori — this time right off of her neck? The stuff should be in a vault. 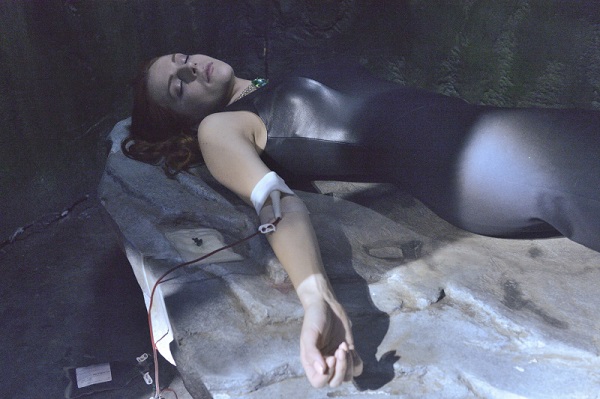 What on earth is going on here? Tori is on a stone slab, with a blood bag attached to her arm. From the position of the bag, she’s being drained, not receiving the blood. She’s still wearing what looks like a precious gem attached to a necklace and she appeared to be clothed in a sacrificial gown.

It definitely looks like J.T.’s kidnapping leads to something more permanent for Tori, even if it’s only someone who ends up keeping her captive. This screams beast mythology, especially with the stone slab and cave-like environment.

Start talking, everyone. What do you make of this? Hit the comments!