Anne Hathaway has revealed why she’s been under the radar lately, saying she wanted to give people a break from herself. 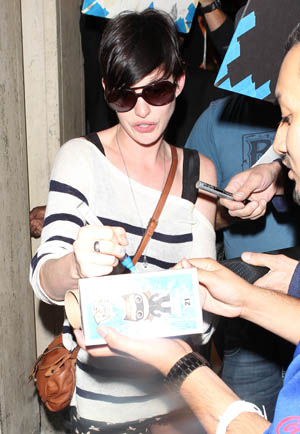 After a slew of criticism and unfortunate incidents, Anne Hathaway stepped away from the public eye and said she wanted to give people a break from herself.

No one has really seen Hathaway since she won her Best Supporting Actress Oscar for Les Misérables almost a year ago. She didn’t appear in any movies or red carpet events last year, and she told the Huffington Post it was as much a choice as it was part of her scheduling.

“My impression is that people needed a break from me,” she told the website during an interview at Sundance where she’s been promoting her new film Song One. “I think there’s a common misconception about actors — that we have a lot more control than we do about when things happen.”

Hathaway had been criticized for the infamous dress debacle with Amanda Seyfried at the Oscars, her accidental lady parts exposure when stepping out of her limo and for her overly dramatic award-acceptance speeches.

Thus, the time off was welcomed by the star; it gave fans a chance to forget the negative backlash and gave Hathaway a chance to come back with a refreshed new outlook. During her downtime, Hathaway enjoyed time with her husband, Adam Shulman, who she just took a romantic trip with to Hawaii earlier this month.

Coming back with a clean slate, Hathaway recently completed Song One and has started shooting Christopher Nolan’s new film Interstellar.

The 31-year-old actress revealed that she was supposed to start work on Song One last fall, but production was moved up to June so she could begin working on Nolan’s film.

“It actually turned out to be pretty good timing,” Hathaway said. “I am not complaining about how it’s working out.”