Soulja Boy finds himself in trouble with the law once again. This time, the rapper has landed in hot water with a felony charge for possessing a loaded weapon. 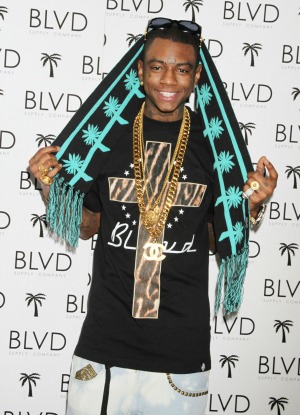 Rapper Soulja Boy has found himself in trouble with the law again. He was arrested early Wednesday morning on a felony charge for possessing a loaded weapon.

The “Pretty Boy Swag” rapper, whose real name is DeAndre Cortez Way, was arrested in the San Fernando Valley neighborhood of Los Angeles, California. He was originally pulled over because he was a passenger in a car that ran a stop sign.

Is Chris Brown headed to jail? >>

According to CNN, police spokeswoman Rosario Herrera revealed the “Crank That (Soulja Boy)” rapper was then immediately taken to jail and bail was set.

CNN reported that Soulja Boy was booked into a San Fernando Valley jail, but freed after posting a $35,000 bond Wednesday afternoon, according to jail records.

“The traffic stop happened on a residential street in the Granada Hills area of the San Fernando Valley at 4 a.m.,” Herrera said.

This is not the first time the 23-year-old star has found himself in trouble. He has managed to rack up a number of convictions, including some in 2011, when he was booked once again on gun and marijuana possession charges, as well as obstruction for evading the police. Last year, he even got himself kicked off a flight.

In August 2013, the “Kiss Me Thru the Phone” rapper was thrown off an American Airlines flight for causing a commotion and being rude to the flight attendants. He refused to sit down and fasten his seat belt when it was time for takeoff.

He apparently felt poorly about it and later released an apology statement that read, “It was a bad night and me and the flight staff didn’t see eye to eye.”

“In hindsight, I’m extremely sorry for all inconvenience caused to the passengers and employees of the airline.”