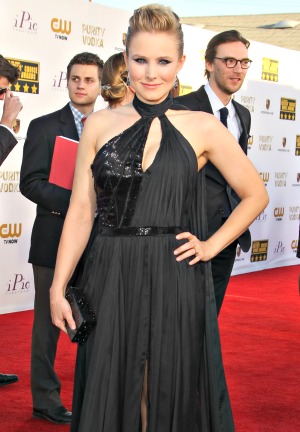 “I was very, very pregnant,” the House of Lies actress told Conan O’Brien during a recent late-night television visit of filming a particularly amorous scene.

“That was kind of a big deal because it’s a dark comedy but also a very sexy show. We make a lot of jokes about sex, there’s sexual storylines. I delivered two weeks after we wrapped and there was a storyline in the second season where I, my character at work has a sex tape come out and she brings it into work and shows everybody. She’s thinking, ‘Let’s just get it over with.’ She’s embarrassed because no one cares.”

The hot mama, seen here at the 19th Annual Critics’ Choice Awards on Jan. 16, continued, “We had to shoot the sex tape and I was seven months pregnant at that time.

“I had this huge beer belly, this huge gut and I was pretending to act in a sex tape. And now I can forever look at my daughter and go, ‘Oh, you were present for that!'”

Referring to her on-camera hook-up with Adam Brody, Bell added, “He affectionately refers to our sex scenes as threesomes because my belly was just on top of him. Is it really that gross?”

No word yet on what Dax Shepard, Bell’s husband and the father of 9-month-old Lincoln, has to say on that subject, but the first-time mom did previously talk about how she fully expects their baby girl to grow into a woman someday.

“People ask, ‘Oh, well you’ve done some sexy material. Do you not want her to see that?’ And I’m like, ‘My guess is, if she’s anything like the other 5 billion people on the planet, she’s gonna grow up and enjoy sex, so I’m not gonna be shocked by that,'” the Veronica Mars star said during a recent appearance on Chelsea Lately.

“I just think you’re setting yourself up for disaster if you try to keep them little. She’s gonna grow up. She has — newsflash! — a vagina, and she’s gonna figure it out one day, and more power to her.”

Do you think Kristen Bell’s sex-positive attitude is the right track for a parent to take?