A Hollywood mystery might have been solved regarding one celebrity family and a Scandal star. Who is Katie Lowes talking about? 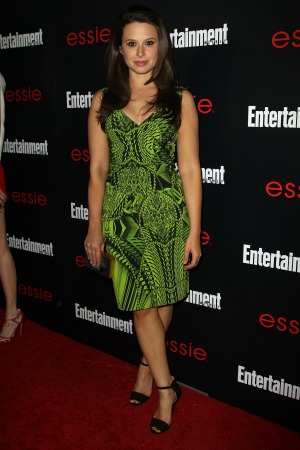 An old Jimmy Kimmel appearance is coming back to haunt Scandal star Katie Lowes after Connie Britton revealed in a new E! interview that Lowes used to be her nanny. Here’s how it all played out.

Back in October, the 32-year-old actress appeared on Kimmel’s late-night talk show. He mentioned that the Shonda Rimes-created show was her first big gig.

She replied, “Yes, 18-ish months ago I had every horrible job in the book — waitress, babysitter, nanny, caterer, personal assistant — you name it.”

Kimmel pressed on and asked her about the worst job she’s ever had. Here’s where the story gets really interesting.

Lowes dished, “I babysat for one celebrity — who will remain nameless — family who didn’t believe in diapers.”

That’s when the talk-show host and audience began to laugh at the ridiculous tale.

“There were cloth-option diapers, but also the baby would just be going around in his little baby life and wearing his little onesie and if he would start to make a face of frustration… what you would have to do is quickly remove the onesie, rush to the toilet, hold the baby over the toilet. I would have to make encouraging poop sounds behind its face,” shared the TV star.

Of course, Lowes had signed a non-disclosure agreement so she couldn’t reveal the name of the celebrity. Fast-forward to this week’s E! News interview with the Nashville star who admitted that Lowes was her nanny before her TV stardom.

Britton joked, “I was so upset when she got this little pilot. I think it was really pretty selfish on her part, I’ll be honest.”

So could this little blind item really be Britton or is it another celebrity that Lowes worked for? The one other hint that Lowes dropped in the Kimmel interview was that the baby had an odd Hollywood name. Britton’s son is named Eyob.

Many other internet sleuths are saying it might be Alicia Silverstone and her son Bear Blu. She’s known for her unconventional parenting techniques, so it’s a pretty good guess as well. However, it’s never been confirmed that Lowes babysat for the Clueless actress.

Who do you think Lowes is referring to? Watch her Kimmel appearance.