A new Beyoncé song featuring her hubby Jay Z is being censored by British radio over an insidious domestic violence reference. 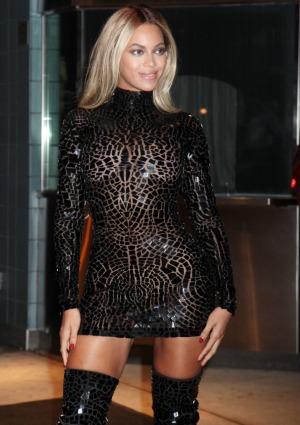 A British radio station has cut out a line from a Beyoncé song because of its thinly veiled reference to domestic violence.

“Drunk in Love,” featuring Beyoncé’s husband Jay Z, has some pretty sexually explicit lyrics — but it’s not the sex that’s the problem.

Beyoncé: Gender equality is a myth >>

Many listeners might have no clue what the line means, but movie buffs do — and so does the head of Bang Radio. Referencing a scene from the movie What’s Love Got to Do With It, the lyric mimics Ike Turner forcing Tina Turner to eat in a particularly brutal scene.

“The lyrics controversially imitate a scene of severe domestic violence,” Jennifer Ogole, CEO of Bang Radio, explained in a statement.

“We believe in the unity of women and music and in no way condone violence, domestic or otherwise, especially not through the power of music.

“Therefore, the decision has been made to wipe the stated lyrics from the song… Respectful of what our audience [wants] to hear on Bang Radio, we feel this is the right action to take in regards to the controversial lyrics of the song and we will continue to serve in social equality for people through music and content on our station.”

Tell us: Should “Drunk in Love” have been censored?

Blue Ivy gets her party on with Michelle Obama
Beyoncé lost 65 pounds after giving birth — to prove a point
OMG! Beyoncé releases a surprise “visual” album