Kanye West says that Kim Kardashian and their daughter North are the two things that keep him grounded and down to earth. 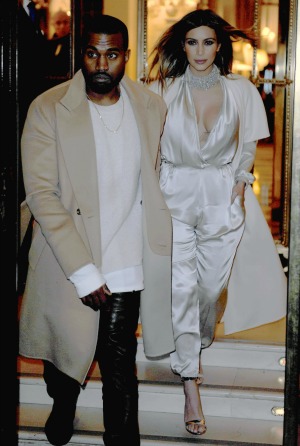 Kanye West is an astronaut in the outer space of fame, but he says baby North West and his fiancée Kim Kardashian keep him grounded.

In a chat with 12 Years a Slave director Steve McQueen for Interview magazine, a surprisingly uncombative West talks about love, love, love.

“You know, becoming famous is like being catapulted into space — sometimes without a space suit,” he said. “We’ve seen so many people combust, suffocate, get lost in all these different things.

“But to have an anchor of other astronauts and to make a little space family… I mean, it’s not like I’m the guy in The Hunger Games begging for people to like me. I’m almost the guy with the least amount of ‘likes.’ I wanted a family. So God gives you opportunities, and you make sacrifices for something that’s greater.

“If someone has got all the money in the world, they’d still want love.”

Kanye West elevated to god status with his own religion >>

West also plans to teach his daughter some very important lessons about living up to one’s potential and never letting the haters bring you down.

“The teachings and the confidence that was instilled by my grandfather into my mother, and from my mother into me — which will now, of course, be instilled by me into North — will create the best winter coat against doubters and dream-killers ever made,” he said.

“Too many people are scared,” he continued. “But it is my job to go up every night and talk about this kind of s***. It is actually my job. I’m like a broadcaster for futurism, for dreamers, for people who believe in themselves.

“We’ve been taught since day one to stop believing in our own dreams. We’ve had the confidence beaten out of us since day one, and then sold back to us through branding and diamond rings and songs and melodies — through these lines that we have to walk inside of so as to not break the uniform or look silly or be laughed at. So I hope that there are people out there laughing. Laugh loud, please. Laugh until your lungs give out because I will have the last laugh.”