Jenni “JWoww” Farley revealed the gender of her baby and confirmed she and fiancé Roger Matthews are expecting a girl. 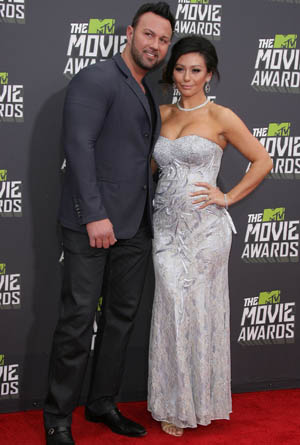 It’s a bambina for former Jersey Shore star Jenni “JWoww” Farley and her fiancé Roger Matthews. The couple confirmed on Wednesday, Jan. 22 that they’ll be having a girl this coming July.

Farley, 27, revealed she “was super-excited and super-emotional” to find out she was having a girl, the reality star alum told Us Weekly.

“I pictured a boy this whole time, so when I saw ‘girl’ on the paperwork, I was like, ‘No way!’ Farley said. “But deep down I think I knew.” She then added that she was excited that her friend and former co-star Nicole “Snooki” Polizzi‘s baby, Lorenzo, “is gonna have a BFF, and I couldn’t be happier!”

The mom-to-be also continued gushing about her future daughter and said, “She will be my best friend and daddy’s little girl. I can’t wait for everything from her first steps to her first dance class.”

However, she also admitted to having some fears, especially when her baby becomes a teenager. “I was a teenage girl once, and, boy, do I know how sneaky we can be! Karma is gonna kick me in the butt with her!”

Meanwhile, her baby’s daddy is already getting ahead of himself, thinking of the future days of car shopping. “He was just saying today what kind of car she’ll get for her sweet 16 if she gets good grades,” Farley said. “I’m like, ‘Pump the brakes! Let’s get through the first 16 months!'”

The couple first announced Farley’s pregnancy on Christmas Day when they included a sonogram photo with their holiday card. Matthews proposed to his longtime girlfriend in September of 2012.