Selena Gomez has revealed what drove her ambition to make her latest album as huge as possible: her breakup with Justin Bieber. 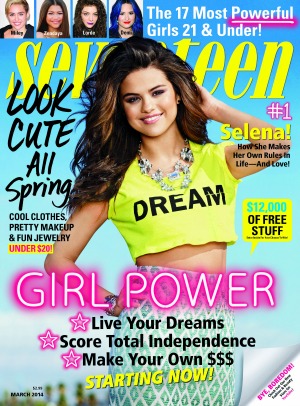 Selena Gomez is riding high on her success after years of toiling as a child star, and now she’s talking about the one incident that pushed her ambition into Olympic-level territory: a broken heart.

In the March 2014 issue of Seventeen, the singer-actress said that a breakup that happens to coincide with the time frame when she and Justin Bieber ended the first chapter of their romance is what really drove her to succeed.

Does Selena Gomez have a new man? >>

“This year is when I really started feeling powerful. I had always been the underdog secretly. I was on Disney when it was Miley [Cyrus], the Jonas Brothers and Demi [Lovato]. I questioned the way I looked, acted, sang and wrote. Then I turned 20, went through a really bad breakup, and realized I needed to have ‘Come & Get It’ be amazing. I wanted it all to be me. I’m glad it’s taken me this long to get where I am because now I am ready for it.”

Gomez reportedly got back together with Bieber in time for the New Year, but a brutal text argument seems to have ended their short-lived reunion.

Now Gomez is doing it all for her fans. “I don’t feel like I can do enough for my fans,” she told the mag. “I work a lot, I work hard, and I get tired. But when you walk onstage and see these people who wait hours outside just to see you, it’s the greatest thing in the world.”

Someone not counted among her fans is fellow singer Lorde, who called “Come and Get It” the ultimate anti-feminist song. But now that Lorde is pals with Gomez’s bestie Taylor Swift, she’s trying to play nice.

“I recently did an interview and they asked me who I thought was up-and-coming and making a difference,” she explained. “I said, ‘She doesn’t like me, but Lorde.’ I’m going to support her whether she likes me or not because I think she’s doing great things. Someday I will see her and we’ll be cool.”

Someone she definitely does count as a friend is Katy Perry, an older mentor who gave her advice on how to handle guys who don’t know what to do with a strong, successful woman. Maybe Bieber fell into this category?

“I actually talked to Katy Perry about guys who are intimidated by strong girls. I haven’t found someone yet who could understand my lifestyle, support it, love me through it and not be threatened by it. It’s hard. I do think I might scare some guys, because I’m like, ‘I want to change the world! I have dreams! What do you want to do?’ But I only know how to be me.”

Read the complete interview with Selena Gomez in the March issue of Seventeen, available at newsstands Feb. 4.