Everyone give props to Lorde’s little sister! She just dropped a cute cover of “Say Something.” We’re mildly impressed with her voice and insanely proud of her guts! 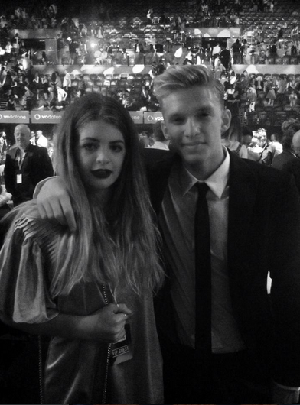 As is usually the case, talent seems to run in the Yelich-O’Connor family. You may not recognize the name unless you’ve done your research, but that’s the last name of current pop phenom Lorde. Yesterday we learned her little sister might be just as talented, too.

With absolutely no hype or explanation, Lorde’s 15-year-old sister, India, sent a Sound Cloud link out into the world via her twitter account and personal blog, Genres of India. The song, an a cappella cover of Christina Aguilera and A Great Big World’s “Say Something” may not be perfect, but her sweet voice captures the sadness of the song, and the starkness of the recording gives something to the lyrics Aguilera et al simply couldn’t give with all their instrumental and vocal theatrics.

Perfect? No. But pretty impressive for a teenager.

So why the sudden release? When contacted by Fairfax Media, Yelich-O’Connor said she did it as “something for a little bit of fun.” Being products of sisterly relationships ourselves, we can’t help but wonder if it wasn’t just a teeny bit related to all the attention her big sis is getting. We also noticed the previous post on her blog was fairly melodramatic. As is the case with most 15-year-olds, it looks like Lorde’s sister might be suffering from a broken heart. Everyone knows the only way to recover is to sing your heart out.

Whatever the reason for her sudden musical release, we’re glad she did it. We’re not sure we’re willing to name her the next big thing, but we do think she might have something there. What would it sound like if some of today’s biggest names in pop were asked to record a live, lo-fi, un-autotuned song?

For more music news and reviews, sign up for our newsletter! >>

Props to this little sister for having the guts to put this out there for the world to hear and for having the courage to bare her soul on the internet. Don’t worry, girlie: It gets less complicated.