Jennifer Lawrence is a massive fan of Homeland. But when she spotted Damian Lewis at the SAG Awards, she was left both starstruck and desperately disappointed. 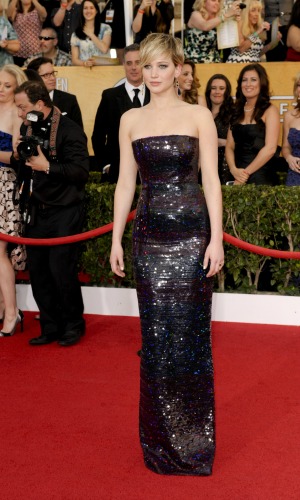 The world has fallen in love with Jennifer Lawrence because she is so natural and goofy, and the Oscar-winning star did not disappoint once again at the SAG Awards.

During an interview with Shaun Robinson of Access Hollywood, the beauty spotted Damian Lewis, who stars as Nicholas Brody in the hit political TV series Homeland. Lawrence could not contain her excitement! The American Hustle actress excitedly revealed to Robinson, “I’ve watched two seasons of Homeland twice, and I’m freaking out a little bit.”

“That is Brody. I’ve never met Brody before,” she said.

After the interviewer managed to get the attention of the British heartthrob, he walked over and met Lawrence, which was clearly momentous for the actress because she gushed, “This is amazing.”

However, even though The Hunger Games star is a major fan of the series, she has not yet had time to catch up on the developments in Season 3 and was left completely shocked after discovering what happened in the unbelievable season finale.

There are few things worse than really getting into a TV show only to have the ending completely blown for you — and this is what happened to Lawrence when Robinson revealed what happens to Lewis’ character at the end of Homeland‘s Season 3.

We feel for Lawrence that the ending was spoiled for her, but her reaction was priceless!

Lewis chimed in and jokingly said, ” Are you crying? You have such extraordinarily emotional access.”

The blond beauty responded, “I’m past mad. It’s this weird other emotion. I feel like my heart just fell out.”