The Originals is taking a page from The Vampire Diaries‘ playbook. Tuesday night’s big plot twist and death revealed that no one is safe. On the upside, that also means there’s still hope. 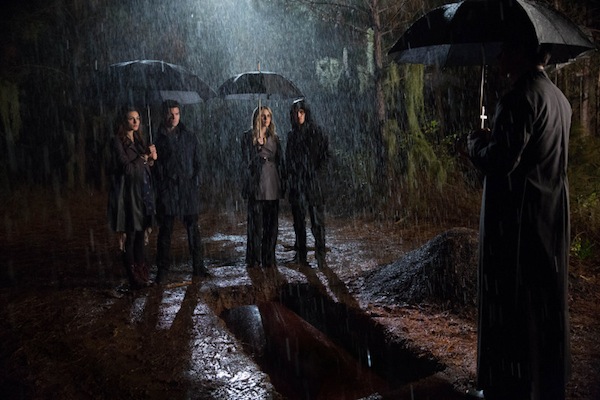 The Originals is getting back into the swing for the second half of Season 1. What started with a few harmless elements ended with some pretty dramatic mishaps. Bad things have hit the fan. OK, so, yeah, the midseason is bringing it and then some.

Thank Davina for the next New Orleans hurricane

This episode starts with our favorite Elijah. He’s so adorable when he’s being clever. He’s on a mission to understand why Davina is drawing Celeste.

That mission is quickly overridden when Davina begins hacking up handfuls of dirt. Yes, we mean literally coughing out dirt.

Will The Vampire Diaries‘ Klaus and Caroline hook up? >>

All that power she was supposed to share by completing the harvest ritual is now destroying her body. Sophie is kind enough to explain that the process begins with earth (hence the dirt), then moves to wind followed by water and, finally, fire. Each element will get progressively worse until it kills Davina and destroys New Orleans. As if the city hasn’t already been through enough.

The ritual is complete, or is it? 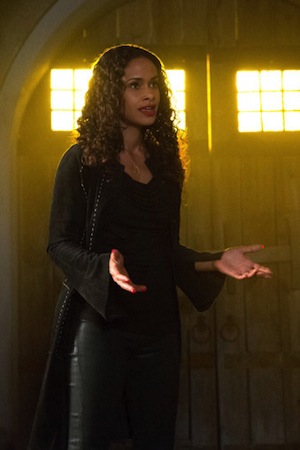 Luckily, Sophie thinks she can fix everything by becoming an elder witch and completing the harvest ritual. She finds Celeste’s grave thanks to Hayley (Phoebe Tonkin), who snoops through Elijah’s journal without permission. To get Celeste’s power, Sophie consecrates the remains. For some reason, it doesn’t work. Though it shouldn’t be possible, the remains have already been consecrated.

Luckily, Elijah has a backup plan in the form of their mother. Marcel tries to run with Davina, but the two eventually give in when she realizes she’s going to die with or without the ritual.

The Marcel/Davina relationship is really endearing this week. As Sophie cuts Davina’s throat, we see flashbacks of the first time the witches attempted the ritual when Marcel saves Davina. This time, he lets her die. The ritual ends, but the girls don’t rise from the dead. Marcel is heartbroken. Cue another heart-wrenching moment as Klaus (Joseph Morgan) consoles Marcel with a hug.

A love triangle 200 years in the making

It wouldn’t be The Originals without a little Elijah and Hayley romance to make our night. Unfortunately, the two are on the outs this episode. He’s upset, of course, that she went behind his back, read his journal and spilled the secret location of Celeste’s remains to Sophie. He definitely has every right to be upset.

But Hayley is genuinely sorry.

Hayley seeks Elijah’s forgiveness. She wants him to choose the living over the dead. Elijah has been hanging on to his relationship with Celeste for too long. Hayley starts to walk away, but Elijah grabs her back. They get really close. Closer still. Their lips hover, inches apart. We can’t breathe. And… he turns his head away. Hayley’s disappointment is retained. Ours isn’t. What?! Hayley just walks away!

In Elijah’s defense, he does seem to regret letting her leave. At this point, we’re wheezing and trying hopelessly to regain some semblance of composure. The tease is as torturous as it is brilliant.

The dead become the living

No, Davina doesn’t come back from the dead yet. Someone else does.

It all starts at the end of the episode when some strange lady goes stumbling through the graveyard, looking clearly out of place. Then there’s a man along the fence. Cut to a woman walking with purpose through the quiet town. Now we know something is up because she’s dressed like she’s from the ’20s, which means she probably is from that era.

These three strange people all convene with none other than Sabine. One of the newcomers recognizes her and calls her by name, but the witch quickly corrects her and asks to be called by her real name: Celeste.

That comment is followed by a sly smirk that can’t mean good things. We don’t think Elijah’s ex came back from the dead to New Orleans just to cuddle with him. She’s up to no good!