On “I’ll Sleep When I’m Dead,” Remy enters a sleep clinic and, while she does get some sleep there, she goes even deeper into her dreams and discovers who has been chasing her through them. 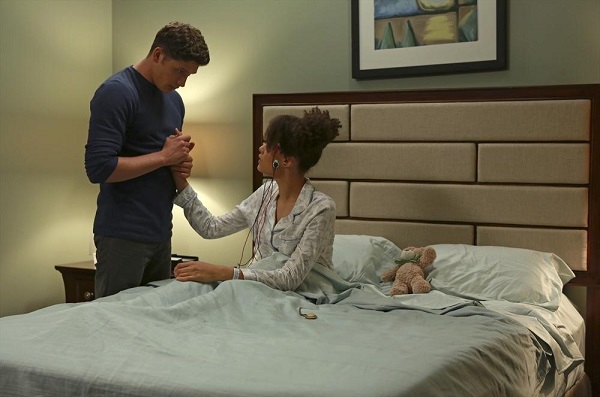 Alright — things are getting pretty interesting on Ravenswood. The land of spirits and ghosts and murders and ties back to who knows makes for an extremely intriguing landscape. It has become interesting in much shorter order than Pretty Little Liars did, and that’s not an easy feat.

There wasn’t that much happening this week, and yet a lot went down. While Remy was getting ready to spend the night at a sleep disorder clinic, Caleb was confronting Collins about tying Miranda to the property. By doing that, Caleb pretty much let Collins know that Miranda is with him. There wasn’t much follow-up to that conversation, but I’d love to know what Collins thinks of that.

Miranda is free to walk the streets again, but this time Caleb has control of her hair sample. I don’t know if he has enough information to know how to seal her up again if he needs to, but it probably makes them both feel better.

What do you think of Lucy Hale’s music video? >>

Miranda’s outside experience is a bit different now. She sees things — looking at her own hand reveals she’s rotting, and again she sees the same by glancing in a mirror. She sees a corpse in a photo sit up. Whether she’s getting stronger and more in tune with the spirit world or just losing her mind is anybody’s guess.

At the sleep clinic, Remy finds out she drew a picture of a man stabbing at her with the knife when she was six. Some sleep and a tea party later and she meets her boogeyman — Reverend Gabriel Abaddon. Not only has he been stalking her in her dreams, but he tells her there is definitely a method to choosing which teens die, and it’s because of debts that are owed.

As we’ve all wondered before, he confirmed that the kids who didn’t die in the car crash are still up for grabs, whether by illness, accident or dying in their sleep. Remy is in so deep that she can’t wake up, but Miranda goes in after her.

Miranda can sometimes seem as though she has fears and insecurities like a regular teenager, but when it comes down to it, she is already dead. The biggest fear that a human faces is already gone. She’s not afraid to do anything when it comes to putting herself into danger — matters of the heart are the only things that worry her now.

Olivia and Tess tried to get in to see Springer after he was hit by a car last week, and Olivia finally found out from Remy’s dad that her own father put Springer’s dad in jail, and that’s why he grew up without a dad. But it’s not something personal that made him plant the knife in her yard to set up her mother — it was Dillon. He made him do it all.

Olivia is now faced with the fact that she lost her most coveted possession to someone who hates her and she doesn’t know why. We only have two episodes left and we’re done. There hasn’t been word on a renewal yet, but I hope the ratings have been strong to keep Ravenswood going.

During the next two hours, I imagine we’ll find out how Dillon is connected to Reverend Abaddon and perhaps a hint of who the little girl in red is. Caleb is ready to start high school, so there will be more action there with the ghosts who are inhabiting the place. It would seem like Season 2 might look a bit different than Season 1.

What do you think they’ll try to wrap up before the end of Season 1, and since it’s inevitable that at least one life will be in danger, whose life do you think will be hanging in the balance as the final credits roll? Isn’t this exciting?