Super Bowl ads are on the way, and Volkswagen is giving us a taste with their brand new teaser ad featuring Carmen Electra. 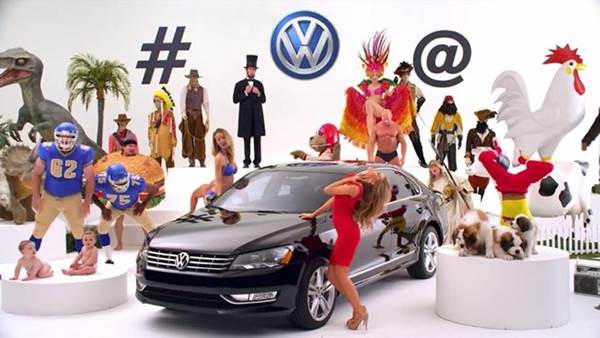 It’s officially that time of year again — Super Bowl commercials are almost here! This year, advertisers are releasing teasers for their spots, and it looks like Volkswagen went all out.

The 60-second teaser ad features Carmen Electra, Abraham Lincoln, a monkey and many other pop culture icons. The spot starts with two fake scientists in the laboratory isolating popular commercial themes to find out exactly what will work for their spot. They then put them all together, along with one of their Volkswagen cars.

“By isolating your most-successful humor ads, we have developed an algorithm to make the ultimate commercial for your big American football festival,” the scientist/actor said.

The scientists’ board includes things like puppies, babies and groin hits all included within the algorithm. Also included in the commercial are things like a unicorn pony, a sumo wrestler, a dancing hot dog, a cow, a giant rooster, a girl in a bikini, a wrestler, football players and a mascot. All eventually goes wrong, but it’s not clear if that is part of what they think people want, or if by combining all the things people want, the fake-commercial world implodes.

“Super Bowl commercials are the most-viewed commercials,” Electra said. “They are always so much fun, and they’re so memorable. It’s exciting to be here and be a part of the new Volkswagen teasers, and it’s going to be a lot of fun.”

The teaser is one of only 23 on YouTube under “Super Bowl Ads.” Others already uploaded include those from Duracell, Dannon, Toyota, Bud Light and others, but it doesn’t look like an official channel by the big game. Judging by Volkswagen’s teaser, the commercials for the 2014 Super Bowl are already looking to be even better than the 2013 Super Bowl.