Selena Gomez was seen getting cozy with a mystery man during a party at the Sundance Film Festival, hinting she may have a new love interest. 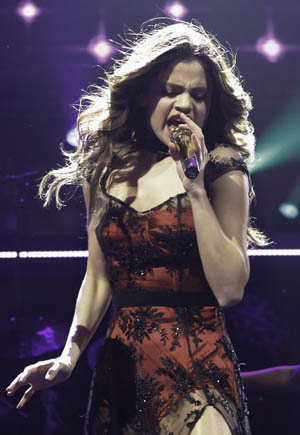 Justin Bieber may be old news for real after Selena Gomez was spotted with a new man at the Sundance Film Festival in Utah Monday night.

Arriving at the Grey Goose party for her new movie Rudderless, Gomez made her way to an upstairs area and went straight to a handsome man with blond hair. The singer spent most of the night with this mystery guy, and the two looked super-cozy together.

“She went up to him really early on in the evening,” an eyewitness told People magazine. The pair enjoyed cocktails and spoke closely to each other, as Gomez placed her hands on the man’s leg several times.

When she broke away from the man long enough, Gomez performed two of her songs at the intimate bash, including her hit “Come and Get It.” Her co-stars also sang a few tunes form the buzzing movie, which is loaded with musical scenes.

While the 21-year-old former Disney sweetie looked very comfortable with her unidentified male companion, a rep for the star said they two are only good friends. But she was in a great mood and having a wonderful time at the party, inciting the unavoidable rumors that there was more than friendship going on.

Gomez didn’t share any known kisses with her man-pal, but the two certainly looked like they were extremely comfortable and happy with each other.

Meanwhile, Gomez has been getting lots of positive feedback for her performance in Rudderless, where she plays the role of a sad and grieving college student. It’s just a small part, but she was ecstatic to just step on a movie set once again, because she admitted she loves acting as much as singing.

“I was stoked,” Gomez said when asked how it felt to pick up the movie part. “I was about to go on tour and I knew it was going to be a year long. I kind of get this panic attack when I know I’m not going to be on a set for a year, just because I love both a lot.”