Katy Perry says her boobs are not only all natural, they are a total gift from God. 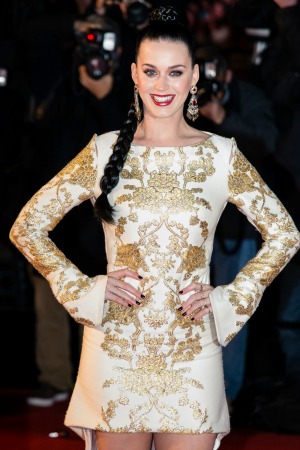 Katy Perry has some major assets — and we’re not talking about her real estate holdings. The “Roar” singer’s bustiness is not a result of skillful cosmetic surgery, but rather the direct answer to her prayers.

Perry explained to GQ, “I lay on my back one night and looked down at my feet, and I prayed to God. I said, ‘God, will you please let me have boobs so big that I can’t see my feet when I’m lying down?'”

“God answered my prayers,” by age 11, she said. “I had no clue they would fall into my armpits eventually.”

“I’ve never had any plastic surgery. Not a nose, not a chin, not a cheek, not a tit. So my messages of self-empowerment are truly coming from an au naturel product.”

But exactly what version of that God answered her boob prayers remains a mystery, even to the evangelical Christian-raised star.

“I do not believe God is an old guy sitting on a throne with a long beard,” she told the mag. “I don’t believe in heaven and hell as a destination. I see everything through a spiritual lens. I believe in a lot of astrology. I believe in aliens.”

Aliens? Oh yeah. “I look up into the stars and I imagine: How self-important are we to think that we are the only life-form? I mean, if my relationship with [Barack Obama] gets any better, I’m going to ask him that question. It just hasn’t been appropriate yet. I might have won Wisconsin for him,” she says of the president. “Actually, I didn’t do too much, but he called on me a couple of times. Which was very nice.”

Alrighty then. As for her relationship with John Mayer, although the press is eager to marry her off, she is in no such rush.

Read the complete interview with Katy Perry in the February issue of GQ.

Katy Perry reveals the cure for a broken heart: An alcohol ban
VIDEO: The story behind John Mayer & Katy Perry’s duet
Katy Perry tops Justin Bieber on Twitter — but is it real?