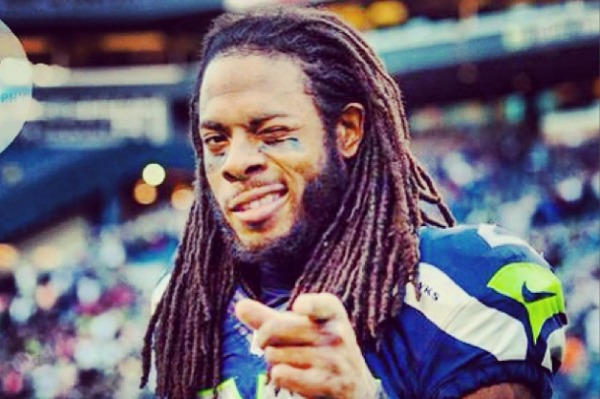 Sherman let loose his torrent on Fox Sports reporter Erin Andrews, declaring himself the best in the league and calling Crabtree “mediocre.”

“I’m the best corner in the game,” Sherman yelled into the mic. “When you try me with a sorry receiver like Crabtree, that’s the result you gonna get. Don’t you ever talk about me.”

“Who was talking about you?” Andrews asked.

“Crabtree,” Sherman said. “Don’t you ever open your mouth about the best, or I’m going to shut it for you real quick. LOB!”

Dennis Rodman was plied with alcohol in North Korea >>

Sherman later explained that Crabtree had been talking smack about him all season, and he simply took the opportunity for payback.

But it’s not so much Sherman’s little speech that got people talking as much as what people were saying about him afterwards. Twitter users repeatedly referred to him as an “ape,” a “jungle monkey,” “gorilla,” ignorant, stupid, a thug, the n-word and multiple combinations thereof, to which the NFL star, who had a 4.2 high school GPA, graduated from Ivy League Stanford University, started his Master’s degree and actively supports numerous charities, did not take kindly.

In a column for Sports Illustrated‘s MMBQ, Sherman explained what really set him off.

“I ran over to Crabtree to shake his hand but he ignored me. I patted him, stuck out my hand and said, ‘Good game, good game.’ That’s when he shoved my face, and that’s when I went off,” he wrote.

“But that’s not why I don’t like the man. It goes back to something he said to me this off-season in Arizona, but you’d have to ask him about that. A lot of what I said to Andrews was adrenaline talking, and some of that was Crabtree. I just don’t like him.”

Sherman has since apologized for his rant and the attention it garnered, telling ESPN’s Ed Werder, “I apologize for attacking an individual and taking the attention away from the fantastic game by my teammates. That was not my intent.”

The Seahawks will face the Denver Broncos in Super Bowl XLVIII on Sunday, Feb. 2.