Miley Cyrus posed for an odd MTV Unplugged promo where she goes topless yet again, but this time, she wears a bizarre set of ugly fake teeth. 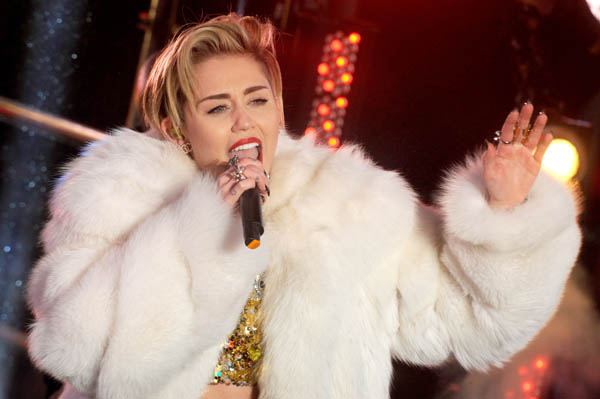 Miley Cyrus is once again flaunting her breasts to the public, posing topless for a strange MTV promo where she also wears a set of hideous fake teeth.

After MTV announced that Cyrus would be featured in an upcoming MTV Unplugged episode, she released her promo, which is nothing if not bizarre. In the promo photo, the singer appears topless, which isn’t surprising at this point, but she’s also sporting a disgusting set of fake choppers.

Cyrus wears a bob-styled platinum wig topped with a big black hat, along with a yellow bandana tied around her neck. The controversial star’s nipples are strategically hidden by two shiny star pasties and she’s also wearing long black gloves.

To get the promo out to her fans, Cyrus posted it on Twitter along with this introduction: “@MTV PRESENTS MILEY CYRUS: MTV UNPLUGGED YALL check it out January 29th!”

Meanwhile, an MTV spokesperson spoke to Gossip Cop about her appearance and why they recruited her for the Unplugged episode.

“Miley’s vision for the performance is like nothing we’ve ever seen before,” the rep said. “I can say that this will easily be one of the most memorable Unplugged performances to date.”

Miley Cyrus, Kellan Lutz are make-out buddies but not dating >>

Of course, anyone who watched the 2013 MTV VMAs is certain to remember the 21-year-old former Hannah Montana star’s half-naked and sexually charged performance. If that’s any indication of what’s to come in her Unplugged appearance, it will surely be another headline-generating experience.

Judging by the promo, this will be a show that, for better or for worse, won’t be fast forgotten.