Of all the skills one would expect Prince Harry to have, this one will probably take you by surprise. 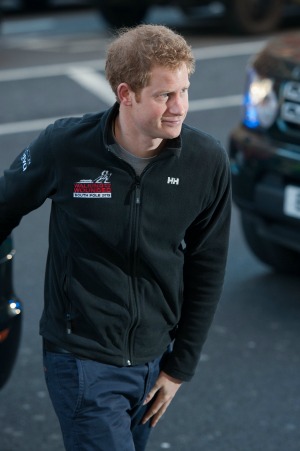 There are things we are fairly certain they don’t teach royals in fancy British boarding schools — and building toilets is one of them. However, Prince Harry is not your ordinary royal, and his mad skills far exceed that of your average aristocrat.

The Wire actor Dominic West, who joined Harry on his Walking With the Wounded trek to the South Pole in December, revealed that not only does our favorite ginger know how to build a mean latrine, but he also has a library of filthy jokes at his disposal.

“He would often reach the meeting point before the rest of his men and would build these incredibly lavish, castellated latrines, with battlements and loo roll holders,” West said during a welcome home conference for the teams in London. “It must have taken him 40 minutes at least to build, they were just fabulous. I would often sit on the latrine thinking, ‘This is a royal flush in every way!'”

“Harry also massively helped me out when I was struggling with my skis at first. He was a great guy.”

And once the teams reached their goal — after several storms delayed their journey — it was party time.

“Two of the Aussie guys stripped naked and ran round the pole but most of us, Harry included, just went on a two-day bender with the Icelandic truck drivers who had brought some lethal home brew with them. There was a lot of liqueur drunk,” West revealed.

“We all drank Champagne out of Duncan’s [Slater, a teammate of the two who lost his legs in Afghanistan] favorite prosthetic legs… [Harry] told some eye-wateringly rude jokes, which for a non-soldier like me was pretty shocking!”

A clean-shaven Harry also spoke at the conference, deflecting all attention off of him and onto the inspiring men and women who made the arduous journey with him and the organization they represent.

“Inspiring others is one of the cornerstones of this charity. To demonstrate to those who have suffered life-changing injuries that anything is still possible,” he said.

“That this truly unbelievable achievement by everyone behind me… will remind everybody that they can achieve anything they want to. Our wounded, injured and sick [servicemen] they simply want to be treated the same way as before they were injured. With respect. For some, the journey may be more of a challenge, and it is up to us to make it as easy for them as we can. We can do that with training, with employment, or even with adventure.”

“If anyone has the ability to give these guys and girls a stepping-stone as regards (to) employment, then please do. You won’t regret it.”

Walking With the Wounded aims to support injured soldiers when they return from battle.