Justin Bieber goes on displaying odd, erratic behavior after inscribing his initials on the snow with his pee at a posh Colorado neighborhood. 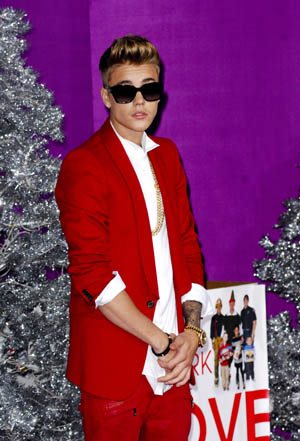 Adding one more act of bizarre behavior to his growing arsenal of controversial deeds, Justin Bieber proceeded to pee his initials in the snow at a wealthy area in Snowmass, Colorado.

Driving with his multiple-Escalade motorcade, Bieber and his crew were passing by a wealthy neighborhood in the snowy town when they all came to a stop, an eyewitness told TMZ. Accompanied by several bodyguards, the Biebs jumped out and began relieving himself right there on the sidewalk.

The pop prince was quick to hop back into the SUV as bewildered residents looked on. Once Bieber drove off, the witness said everyone went to check out the scene and discovered the initials “JB” made out in urine on the snow.

This latest prank comes on the heels of heated rumors that Bieber has a serious drug problem. The teen is believed to heavily abuse an illegal concoction known as sizzurp, or lean, which is a mix that includes codeine cough syrup and soda.

Other recent scandals surrounding Bieber include his being accused of egging the neighbor’s house reportedly causing several thousand dollars in damages. When authorities raided Bieber’s home in relation to the egg incident, they allegedly found numerous drugs and paraphernalia that would confirm his drug issues.

Was Justin Bieber not joking about retirement? >>

Then, to add fuel to the fire, other reports surfaced this weekend that claim jars of weed were found at Bieber’s home along with some explicit texts to his ex, Selena Gomez. Police sources claim that along with all the drugs they found, some x-rated text messages were also uncovered where the singer supposedly sent photos of his penis to try and win Gomez back.

During the text exchange that supposedly took place between Bieber and Gomez, the “Come & Get It” singer told her former love that he needs help for his bad drug problem.

However, Bieber’s people are claiming that the texts are fake and were sent from someone in Bieber’s circle.

Needless to say, Bieber seems to be in need of some sort of help, be it for his supposed drug addiction, his behavioral issues or both.