Robin Thicke is going to have to explain another set of photos after he’s caught canoodling with a young woman in Paris. Does his wife care? 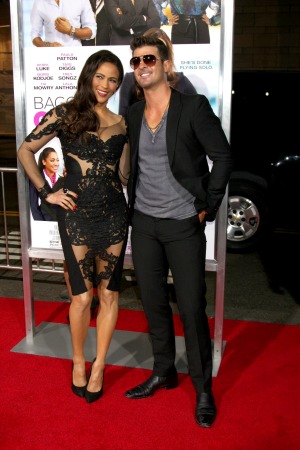 It’s another photo scandal for Robin Thicke, who was caught by the cameras getting awfully cozy with a woman who wasn’t wife Paula Patton. RadarOnline has the photos, which showcase the singer whispering into a young woman’s ear while they dance intimately at a Paris nightclub.

The “Blurred Lines” singer has crossed this boundary before when he was seen with his hand on another woman’s butt at a post-MTV Video Music Awards party. He reportedly slipped his number to the young socialite at the end of the night, too.

At the time, Thicke commented to Star, “My only comment about the so-called scandalous photo would be that my wife and I are perfectly in love and very happily married, so, no complaints there.”

Even though she didn’t complain then, what will she say now? The 36-year-old musician has been in Paris to promote his clothing line. Patton was last seen solo at the Golden Globes red carpet on Sunday, Jan. 12.

Is there trouble in paradise or does the couple just run their marriage a little differently than most folks?

Robin Thicke learned all he knows about women from his dad >>

In the past, he has told the magazine that they have “the greatest love of the century, and the most functional, dysfunctional marriage in Hollywood.”

Patton has also defended her man. After the MTV VMAs scandal, her reps denied any cheating claims and stated, “Paula and Robin aren’t concerned and are happily vacationing in Florida.”

There’s been no word from either party about the latest set of photos. Perhaps the two are happy with the marriage just the way it is.