Ariana Grande has revealed how being on television has ruined her hair to the point that she has to wear “more fake hair than every drag queen on earth combined.” 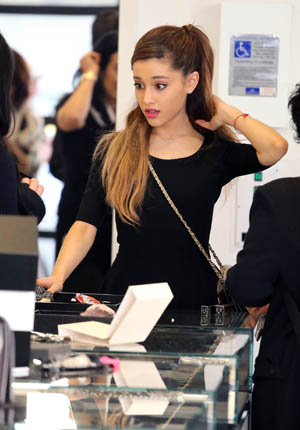 Amid criticism over her appearance lately, Ariana Grande opened up about how her hair looks when she’s out in public and claimed that TV destroyed her once-pretty locks.

Tired of hair critics blasting her at every turn, Grande took to Facebook on Sunday and explained why she has to wear so many extensions and sport the same ponytail style all the time.

So soon? Ariana Grande and Nathan Sykes split up >>

“I had to bleach my hair and dye it red every other week for the first 4 years of playing Cat,” Grande began. “As one would assume, that completely destroyed my hair. I now wear a wig on Sam & Cat.”

Grande went on, adding, “My real hair is back to brown and I wear extensions but I wear it in a pony tail because my actual hair is so broken that it looks absolutely ratchet and absurd when I let it down. I tried wigs, they looked RIDICULOUS. Tried a weave because I am working on a new project and want to try some different looks and literally wanted to rip my scalp off.”

The Nickelodeon star addressed the critics by saying that it may be “annoying” for them to look at the same hair time after time, “but that’s what works for now.” Grande also admitted that this is the first time she’s felt comfortable with her look in years.

“And trust me,” Grande continued. “It’s even more difficult for me to have to wait forever for my natural hair to grow back and to have to wear more fake hair than every drag queen on earth combined.”

The “Grenade” singer concluded with a plea to fans to leave her alone about her hair problems.

“So PLEASE give me a break about the hair (or just don’t look at me lol),” Grande said. “IT”S JUST HAIR AFTER ALL. There are way way way more important things. Love y’all very much.”