Cops may have found a lot more than eggs at Justin Bieber’s house last week — and it sounds like he’s now on the outs with Selena Gomez, too. 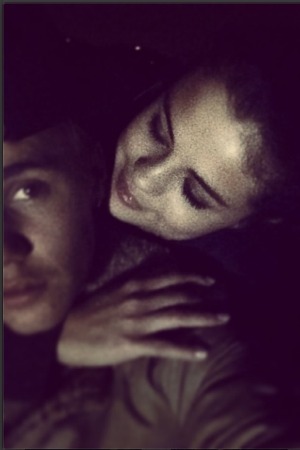 Justin Bieber’s very bad January has gotten worse as details of the police raid and private texts between him and Selena Gomez have hit the press — and both hint at a major drug problem.

According to an unidentified police source, cops found two cookie jars filled with pot and drug paraphernalia, including empty codeine bottles and Fanta bottles that appeared to be stained by “sizzurp.”

However, the dozen detectives on-scene could not open the jars because that would go beyond the scope of their original search warrant, the insider told TMZ.

‘We’re not doing some big sting on Justin Bieber,” Thompson said. “We didn’t go opening containers and pulling out drawers. This was about the egging.”

Bieber’s cohort Lil Za was arrested on suspicion of possession of illegal narcotics, including cocaine, Xanax and Molly.

Adding to Bieber’s woes are text messages purported to be between him and Selena Gomez, in which he comes across as an insufferable jerk who tries to use pictures of his penis to sweet-talk his girl into coming back to him.

According to RadarOnline, the exchange between the on-again, off-again couple quickly degenerated into name-calling when it became clear that Gomez was not going to fall for Bieber’s adolescent antics anymore.

Justin: Baby come on. I love you.

Selena: I don’t buy that bulls*** anymore
I was honest with you and I gave you a second chance
All my friends were right. You’re such an a******

Justin: You’re all I need right now. I know I can make it right with you.

Selena: U r a drug addict. U need help.

Justin: Come on. Don’t tell me you don’t miss this [Insert photo of erect penis]

Selena: Stop it
You need to listen to scooter and go to rehab. U r sick.

Selena: Why r u sending these to me. We r done
And how can you let za take the fall for your actions
U need to grow the f*** up
I hope you get jail time. U deserve it at this point

Selena: Good!!! Go “retire” or whatever bulls*** attention ur trying to get

Justin: Can’t hear you over my cash, babe! You’re only famous cuz of me. You know it. I know it. Everybody knows. Bye.

Selena: I know all about Kristina btw
F*** u

Justin: Nah. Go f*** someone else. Keep that talentless pussy away from me!

According to Bieber’s camp, the texts are fake and came from someone in the singer’s camp who is turning on him. Gomez’s peeps have not yet commented.