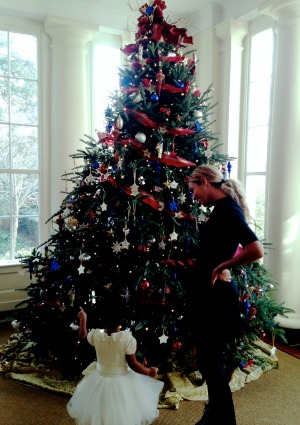 Celebutot Blue Ivy joined her famous parents Beyoncé and Jay Z at a big bash for first lady Michelle Obama’s 50th birthday — and the fab family were not by any means the only A-listers in attendance!

“I gotta tell you, it was literally a house party. It was a house party that happened to be in the White House,” Al Roker told the Today Show this morning.

“There were all these stars, which was kind of terrific, in fact for a while there I thought who are all these kids and it turns out Sasha and Malia invited a lot of their friends, so there were a lot of young people.”

“While Beyoncé was performing, Paul McCartney was kind of talking or grooving with Stevie Wonder,” Roker continued.

“I actually got to boogie a little with the first lady. Deborah and I were dancing, and I turn around and all the sudden there was Mrs. Obama and she was dancing with Sasha. Here’s like a mom and her daughter just kind of grooving and having a good time.”

While the hosts instituted a strict no cellphone policy at the shindig, many stars posted photos from before and after the party — including a betutu-ed Blue Ivy admiring the still-standing White House Christmas tree.

After entertaining the crowd by doing the Dougie, President Obama gave a late-night, heartfelt toast to his wife, telling their guests that Michelle had made him a better man.

“It was really beautiful and really touching,” musician Herbie Hancock told CNN’s Political Ticker blog. “He said something — his voice almost cracked like he was crying. It was just beautiful, a husband speaking about his wife.”