Kim Kardashian was the most searched celebrity behind Miley Cyrus on Yahoo! in 2013. So why is the show about her family’s drama, Keeping Up With the Kardashians , suffering a decline in ratings? 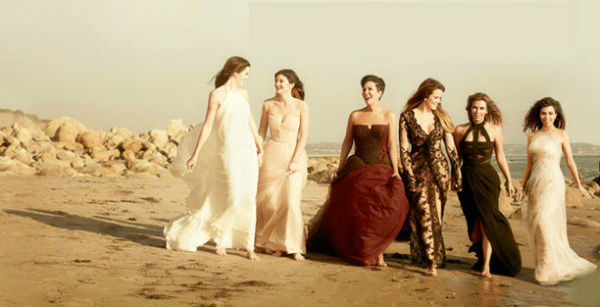 New Kanye West rant: What did Kim Kardashian do wrong in her last life? >>

How did we know all of these things? Primarily through the Kardashians’ ongoing love affair with social media. This family rarely has an unfiltered thought, and if they aren’t sharing their life through Twitter, then the media figure it out through their relentless pursuit of the Kardashian clan.

Listening to like, the Kardashians talk, like, makes us want to like, light our hair on like, fire. Have you ever seen a group of people abuse the word through such indiscriminate use of it? It’s like, the most annoying thing ever. On Part 1 of Sunday night’s premiere, Rob Kardashian and his sister Khloé are trying to have a serious conversation about Rob’s decision to move out of Khloé’s house because of the troubles she and her husband Odom are having — but they use the word “like” so much that it’s hard to focus on the emotional aspect of the discussion. The same thing happens when Kourtney and Khloé are driving back from Dash and Khloé is having a breakdown about her troubled marriage. We wanted to feel bad for her, but we were so focused on how many times she used the word “like” that we got distracted. It’s like, enough already.

The story line within this family has become stale, and it’s hard to pinpoint exactly why. The two youngest daughters, Kylie and Kendall, just come across as clueless, overindulged girls from Beverly Hills, California. The behaviors of the others have become predictable. We know Disick is usually going to say or do something that makes us all mentally beg Kourtney to dump his a**, we know that one or all of the girls are going to get miffed at their mother before the show is over and that Kris is just going to take it until her princesses get over it.

Remember that hilarious Chandler quote from Friends where he quips, “Oh, I think this is the episode of Three’s Company where there’s some kind of misunderstanding?” That’s kind of what’s happened to KUWTK. “Oh, this is the episode of Keeping Up With the Kardashians where they overuse the word “like,” Kim’s biggest problem in life is the side effects of her popularity and wealth, and all the siblings and/or Kris bicker and get into some sort of disagreement.”

KUWTK is a show that is going to start to have competition issues. It’s going to fall victim to something bigger and better that comes along, which on Sunday night (in some time zones) was the NFC championship game. Even die-hard fans of the show likely had someone in the family who was more interested in the game than the premiere — Americans love their sports, after all. Now we live in a world where we can record our favorite programs when such situations come about, but if you’re watching one show and recording another, then by default the recorded show is less important than the one you decided to watch in real time, commercials and all.

Too much of a good thing

That cliché “too much of a good thing” is alive and well when we are discussing the Kardashians. Whatever intrigue we attached to becoming voyeurs of the Kardashian family may have diminished because of oversaturation. The Kardashians have wormed their way to the top of the pop culture heap and Americans are growing weary, particularly because this family is more infamous than they are famous. Their popularity grew in part because of the morbid fascination of their notoriety being born out of an O.J. Simpson trial, a sex tape and a hunger for fame.

Some argue that Kim’s relationship with West draws fans to the show, but from where we’re sitting, it feels like for every fan that West has, he has five “haters.” We’re not convinced West is an asset when it comes to the family’s popularity, and his ongoing rants and altercations may end up costing the family more than helping them in the long run.

It’s too soon to tell what the future holds for KUWTK’s ratings. Part 2 of the Season 9 premiere airs Monday night on E!.