Celebs say the darndest things! Check out some of the choice quotes and wacky one-liners that went down at tonight’s annual SAG Awards. 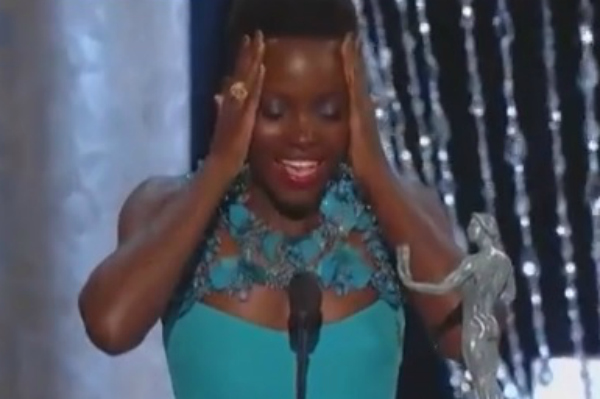 “My dad was the first person I called when I got this role, and I said to him, ‘Daddy, you know Brad Pitt? I’m going to be in a movie with him.’ And he said, ‘I don’t know him personally, but I’m glad you got a job.’ So am I… so am I!” — Lupita Nyong’o, accepting her SAG award for Best Supporting Actress

“I voted a lot for myself.” — James Marsden, joking on the red carpet about scoring two SAG nominations

“I’d like to begin by thanking the members of the Hollywood Foreign Press for this Golden Globe…” — Julia Louis-Dreyfus, getting “mixed up” while accepting her award for Outstanding Performance by a Female Actor in a Comedy Series

“This is gonna be the most fun night for me, because I don’t get out much.” — Oprah Winfrey, chatting with Giuliana Rancic on the red carpet about her SAG nomination for The Butler

“But boy, when it does, and it feels like they could put a blindfold on you and put you on a spaceship and take you to Neptune and you could hop off on the planet and they better have the sprock [sic] control and you get off that spaceship because you are going to behave as your man. That is a glorious feeling!” — Matthew McConaughey, rambling (albeit endearingly) during his acceptance speech for Outstanding Performance by a Male Actor in a Lead Role

“I know most of you out here have read my book, Acting: How to Do It Good.” — Ty Burrell, accepting his win for Outstanding Performance by a Male Actor in a Supporting Role

“We’re going to make Sofia talk because America loves her and her boobs.” — Julie Bowen, prefacing Vergara’s speech for Modern Family‘s win for Outstanding Performance by an Ensemble in a Comedy Series

“Make no mistake — I don’t come home looking like that.” — Amy Adams, on her sexpot appeal in American Hustle

“Matt [Damon], I want to be serious right now… I know we’ve gone head-to-head.” — Michael Douglas, accepting his award for Best Actor in a TV Movie or Miniseries

“I don’t feel at all saggy. I feel quite perky.” — Helen Mirren, joking as she took the podium for her surprising win over Elisabeth Moss (to whom she gave a shout-out!)

“Last but not least, to my mother, who is here — the hottest date in town — I just want to say thank-you for giving me such a shining, wonderful example of the possibilities of life, for showing me the power of dreams and for being the best mother in the entire world. I love you.” — Jared Leto, making women everywhere swoon while accepting his award for Outstanding Performance by a Male Actor in a Supporting Role

“Is this music available on CD?” — Emma Thompson, joking as she presented an award

“We have the nicest bunch of white-supremacist Nazis you could ever work with.” — Bryan Cranston, kidding about the Breaking Bad characters as the show accepted Best Performance by an Ensemble for a Drama Series

“I know I have armpit fat, it’s OK. Armpit vagina… it’s awful.” — Jennifer Lawrence, fretting over the state of her strapless dress on the red carpet

“Matthew McConaughey spoke about Neptune. I think I can have five seconds.” — Cate Blanchett, deadpanning during her acceptance speech for Outstanding Performance by a Female Actor in a Leading Role

“I am so f****** thrilled. I hope the man with the button was there on time.” — 82-year-old legend Rita Moreno, before singing her way to accepting the SAG Awards Lifetime Achievement Award

28 mins ago
by Caroline Greelish