Someone needs to cast this woman in a film. Rita Moreno wows the SAG Awards audience with dancing, singing and an F-bomb. 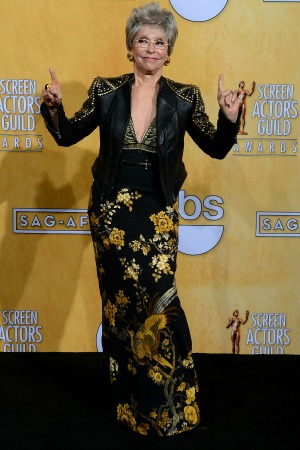 With Morgan Freeman doing the introduction to the SAG Awards‘ Lifetime Achievement Award, Rita Moreno’s speech became the highlight of the entire show. She’s already the recipient of an EGOT — an Emmy, Grammy, Oscar and Tony — so this was just the icing on the cake.

When she first approached the stage after a standing ovation, the sassy Latina danced and thrust her hips before dropping an F-bomb.

From there, the speech only got better.

She said, “I hope the man with the button was there on time,” in reference to the censors who were needed due to her colorful word choice.

The 82-year-old performer kept her former Electric Company co-star onstage with her while they re-created a sketch from the PBS show by sounding out “SAG-AFTRA.” It was a memorable moment for kids from the 1970s.

Here are a few other fun quotes:

In reference to her F-bomb: “I’m sorry about that word — actually, I’m not.”

Flirting with Brad Pitt: “To quote my younger self, I leave you with this: ‘Hi, Brad.'”

“Late in the first act of my career, I was recognized with an Oscar. I was 31 and so astonished and surprised, as you saw in the clip. I could only muster an ‘I don’t believe it. I leave you with that.’ And now, this unexpected honor at 82.” (She then weeps.)

“So let me say this: ‘Hi, Jeremy Renner. Ooooo!'” (She loves to flirt with the young men!)

As if that weren’t enough for the enraptured audience, the West Side Story star sang two songs in appreciation of the honor. When she finished, she walked off the stage arm in arm with Freeman.

Moreno still knows how to command an audience.